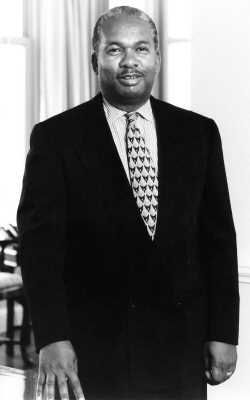 Born in Little Rock, Arkansas in 1941, Ernest Gideon Green was no stranger to the Civil Rights Movement as his mother was a NAACP member and took part in protests against unequal pay between whites and blacks. Partly inspired by Dr. Martin Luther King, Jr. and the Montgomery Bus Boycott, Green’s family decided to become plaintiffs in the lawsuit that desegregated Little Rock’s Central High School.  Green and eight other African American high schoolers became known as the Little Rock Nine.  They would be the first test of the 1945 U.S. Supreme Court decision in Brown v. Board of Education which officially desegregated the nation’s public schools.

Facing daily bouts of physical and verbal threats and abuse from fellow students and angry white adults, Green and the other eight students were guarded the entire school year by elements of 101st Airborne Division send into Little Rock by orders from President Eisenhower.

After becoming the first student to graduate from the now racially desegregated Little Rock High School in 1958, Green was accepted into Michigan State University.  He graduated four years later with a Bachelor of Arts degree while still engaging in civil rights activity in Arkansas.  Green received a Master of Arts in 1964.

In 1968, Ernest Green became director of the A. Philip Randolph Education Fund. In 1977 he served as an Assistant Secretary of Labor during the Jimmy Carter administration. By 1981 Green became a partner in Green & Herman, a consulting firm.  Four years later he became a Managing Director for Lehman Brothers.

In 1993, The Ernest Green Story, a movie about his life, was released. Other honors and awards include the NAACP’s Spingarn Medal, the Rockefeller Public Service Award, and an honorary doctorate degree from Michigan State University. In 1999 Green, a member of Sigma Pi Phi Fraternity, received a Congressional Gold Medal from President Bill Clinton highlighting his outstanding deeds and service to the security, prosperity, and national interest in contribution to society.