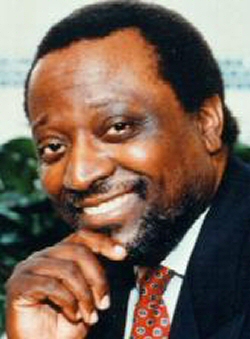 A controversial and conservative Republican, Alan Lee Keyes has perhaps one of the most extensive resumes to date in public and political life.

His positions and appointments include but are not limited to: U.S. Department of State Foreign Service Officer of the consular office in Bombay, India from 1979-1980; desk officer in Zimbabwe from 1980-1981 and then policy planning staff, 1981-83; U.S. representative to the United Nations Economic and Social Council (UNESCO) from 1983 to 1985; assistant secretary of state for International Organization Affairs from 1985 to 1988; Republican nominee for U.S. Senate from Maryland in 1988 and in 1992; President of Citizens Against Government Waste from 1989-1991; Interim President for Alabama A&M University in 1991, and host of nationally syndicated “America’s Wake-Up Call” show.  Alan Keyes launched candidacies for President of the United States in 1996 and in 2000.

Born in Long Island, New York, Keyes attended Cornell University and then Harvard University where he earned a B.A. in Government Studies in 1972 and his doctoral degree in 1979.

His diplomatic career began during his final year at Harvard where he accepted a position in the U.S. State Department as a Foreign Service Officer in India.  Eight years later Alan Keyes was nominated by the Maryland Republican Party to run for the United States Senate. In 1996, he sought the Republican nomination for President but lost to Kansas Senator Bob Dole. Keyes sought nomination again in 2000 and went into several debates with John McCain and President George W. Bush, where he proved to be a worthy opponent. In 2004, he came to the aid of the Illinois Republican Party to run against Sen. Barack Obama, a race which he lost.

Controversy is abundant in Keyes’s career. In 1969, black militants took over the student center at Cornell and Keyes spoke against the takeover. His protest was met by death threats and he decided to leave his studies at Cornell. During his service with the Reagan Administration he opposed economic sanctions against South Africa in response to apartheid, a stance that drew criticism from many prominent African American leaders.  Keyes’s political and social views were in line with those of the Christian Conservative Right which soon became his political power base.  Keyes, for example, regularly denounced abortion and homosexuality.