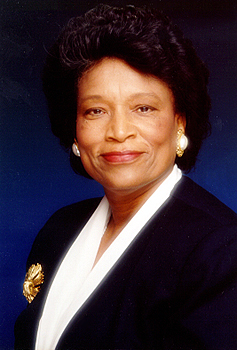 Best known for being the first black woman to be elected to Congress in the state of North Carolina, Eva Clayton, a Democrat, became known as a vigorous advocate for the concerns of African Americans and for social improvement.

Clayton ran for a congressional seat and won in 1992 with over 68 percent of the vote, against her opponent who was a white Republican. Her victory made history, as she became the first African American woman to represent the state of North Carolina as well as one of two African Americans elected to Congress from that state for the first time since Reconstruction.

Eva Clayton has served on the Agriculture and Budget Committees and the Department Operations, Nutrition, and Foreign Agriculture Subcommittee. She was also the co-chair of the Democratic Task Force on Health and member of the Social Security Task Force.

She has also been the executive director of the Soul City Foundation, which specialized in low incoming housing, and been a member of the Congressional Advisory Board to the national Campaign to Prevent Teenage Pregnancy. Clayton was the principal sponsor of the “Patients Bill of Rights” bill. She also sought to reduce crime in inner city schools and fight drug abuse.

Clayton was reelected to Congress for four additional terms and retired from that body in 2003.