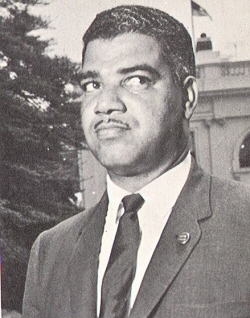 Whitney Moore Young, Jr. was born July 31, 1921 in Lincoln Ridge, Kentucky on the campus of Lincoln Institute where his father was President. Young received a Bachelor of Science degree from Kentucky State College for Negroes in 1941.

Upon graduation, Young joined the Army Specialist training program and was assigned to a road construction crew composed entirely of black soldiers led by Southern white officers. He was promoted from private to first sergeant three weeks after joining his unit. The promotion created resentment among both the black soldiers and white officers.  Young credited the controversy surrounding his rapid promotion as sparking his lifelong interest in racism and in fighting for civil rights.

After World War II ended Young attended the University of Minnesota where he earned a Master’s Degree in Social Work.  He was hired to lecture at the university after his graduation.  Young then served as director of the National Urban League (NUL) branch in Omaha, Nebraska in the early 1950s.  In 1954 at the age of 33 Young was named Dean of the School of Social Work at Atlanta University.  Young became active in the Atlanta National Association for the Advancement of Colored People (NAACP) and in 1960 was elected president of the Georgia NAACP.

In 1961 Whitney Young was named President of the National Urban League.  Young came to the helm of this organization during the early years of the civil rights protests across the nation.  He took over an organization that had not veered from its original purpose, to help black migrants from the South find jobs, and provide assistance while they adjusted to their new northern industrial surroundings. Young, however, transformed the League into a major civil rights organization. He called for a “Domestic Marshall Plan,” a program to get rid of poverty and deprivation among African Americans similar to the Marshall Plan that had been launched to reconstruct Europe after World War II. Young also initiated the Urban League “Street Academy,” an alternative education program to prepare high school dropouts for college.  Whitney Young’s programs for integration and racial justice were explained in two books he authored, To Be Equal (1964) and Beyond Racism (1969).

Young increased the budget of the National Urban League and created thousands of new jobs for African Americans. He also took part in a number of major civil rights demonstrations including the March on Washington on August 28, 1963.

Under Young’s leadership, the National Urban League received grants from government and private sources to work on projects such as job training, open housing and minority executive recruitment. Young also served on numerous presidential commissions. In 1967 President Lyndon Johnson appointed him as a member of an American team to observe elections in South Vietnam. Young disagreed with Johnson over foreign policies and joined the campaign against the Vietnam War. He argued that it was diverting badly need funds from domestic programs for the poor.

Whitney M. Young was a member of Alpha Phi Alpha and Sigma Pi Phi fraternities.  He was one of most respected and influential civil rights leaders in the United States during the 1960s. Yet, he never attained the celebrity of his contemporaries, Martin Luther King, Jr., Malcolm X, and Stokely Carmichael.  Young did receive the Medal of Freedom in 1969 from President Richard Nixon. Whitney M. Young died on March 11, 1971, in a swimming accident in Lagos, Nigeria.