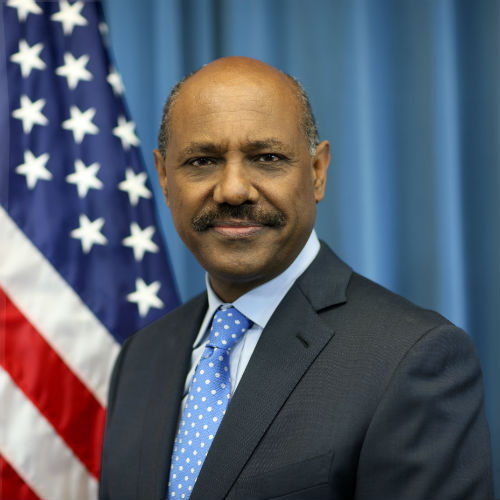 Daniel W. Yohannes, a businessman, philanthropist, and diplomat, was born in Addis Ababa, Ethiopia on September 22, 1952. He moved to the United States at age 17 as an exchange student in the 11th grade, attending high school in Los Angeles, California.

After working as a stock room clerk in a clothing store and later as a teller at a local bank in Los Angeles, he earned a B.A. in economics from Claremont McKenna College (1976) and a Master of Business Administration (M.B.A.) from Pepperdine University (1980).

Yohannes began his professional career as a Management Trainee at Security Pacific National Bank (now part of Bank of America) in 1977, eventually becoming Executive Vice President in 1992. Yohannes moved to Denver, Colorado later that year to become President and CEO of Colorado National Bank where he served until 1998. During this time Colorado National Bank was acquired by U.S. Bancorp and Yohannes would serve the larger bank in several capacities from 1998 to 2006, including President and CEO of its Colorado Division, Vice Chair of its Commercial Banking Group, and member of its Management Committee.

In 2006, Yohannes retired from banking and led the transition team of Colorado Governor-Elect, Democrat Bill Ritter, that year.  He also briefly served as President and CEO of M & R Investments, a privately-held investment firm specializing in investments in real estate, financial institutions, and green energy before later in 2006 becoming one of the founders of the New Resource Bank which focused on investments in environmentally sustainable business ventures.  He remained there as Chair of the Board of New Resource Bank until stepping down in 2008.

In 2009, President Barack Obama nominated Yohannes to lead the Millennium Challenge Corporation (MCC), a U.S. foreign aid agency created by Congress in 2004 to provide large-scale grants to developing countries to help end world poverty through economic growth. Yohannes was unanimously confirmed by the U.S. Senate to serve as CEO of the MCC in September of 2009.

Yohannes served as the corporation’s CEO and as Chairman of its Board of Directors, which included U.S. Secretaries of State and Treasury, the Administrator of the U.S. Agency for International Development (USAID), the U.S. Trade Representative, and four private sector representatives. Yohannes led the MCC during a time when it invested more than $9 billion in development projects aimed at lifting more than 173 million people out of poverty in over 25 countries.

In 2013, President Obama nominated Yohannes as U.S. Representative to the Paris, France-based Organization for Economic Cooperation and Development (OECD), with rank of Ambassador. After Senate confirmation in 2014, Ambassador Yohannes moved to Paris to head U.S. efforts to promote investment, economic development, education and transparency in business and government in over 70 nations including emerging economic powers such as Brazil, South Africa, China, and post-Cold War Russia.  During his time at OECD, Ambassador Yohannes established the Group of Friends of Inclusive Growth, whose goal is fostering collaboration among OECD member countries and outside stakeholders, including the private sector and local government leaders.

Ambassador Yohannes’ leadership and contributions have been widely recognized. In 2013 U.S. Secretary of State Hillary Clinton awarded him the Secretary’s Distinguished Service Award, the State Department’s highest honor. He has also been named by The Africa Report as one of its top 50 most influential Africans in 2012. Also, the governments of the Philippines, Benin, and Honduras have all on separate occasions given him national honors.

Ambassador Yohannes is married to Saron Yohannes, and they have three children.