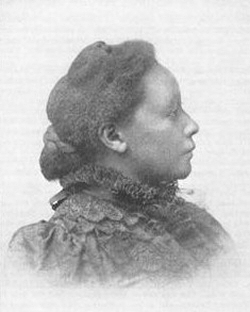 Teacher, writer, and civil rights activist Josephine Silone, the youngest daughter of Alexander and Parthenia Reeve-Silone, was born in Mattiluck on Long Island, New York in 1852.  At age eleven, Yates moved to Philadelphia to live with her uncle, Rev. J.B. Reeve, in hopes of finding greater educational opportunity. There she attended the Institute of Colored Youth run by Fannie Jackson Coppin. By the time Silone was old enough to attend high school, an aunt invited her to live and go to school in Newport, Rhode Island. Silone, the only black student in her class and the first to graduate from Rogers High School in Newport in 1877, was selected class valedictorian.  Silone’s high school teachers encouraged her to attend a university but instead she chose Rhode Island State Normal School, a teacher’s college and again graduated as the only African American student in 1879.

After passing the Rhode Island State Teacher Certification, Silone moved to Jefferson City, Missouri to begin teaching at Lincoln Institute (later Lincoln University) and to head the Department of Natural Sciences. She resigned in 1889 to marry Professor W.W. Yates, then the principal of the Wendell Phillips School in Kansas City.  Josephine Silone Yates, who also taught at the Phillips School, soon became known and admired as one of the best teachers in the state of Missouri.

For most of her life Josephine Silone Yates wrote while teaching.  She penned newspaper and magazine articles often under the alias R.K. Potter.  By 1900 she expanded her writing to include poetry. Some of her published poetry pieces include “The Isles of Peace”, “The Zephyr”, and “Royal To-Day”.

Josephine Yates was involved in clubs and organizations that fought for racial and social change.  She helped to organize the Kansas City Women’s League and was its first president in 1893. After the National Association of Colored Women (NACW) was established in 1896, Yates became one of its most dedicated supporters.  She served for four years (1897 to 1901) as treasurer and four years (1901-1905) as NACW President.   Josephine Silone Yates died in Kansas City in 1912.