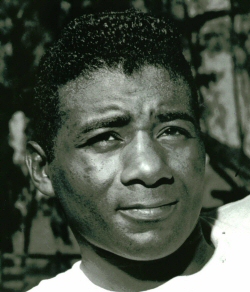 Floyd Patterson was born on January 4, 1935 in Waco, North Carolina. A year later the family moved to Brooklyn, New York. Soft spoken and extremely shy, Patterson fell behind in school and at age ten was still unable to read or write. He became a frequent truant and after being caught stealing a number of times, his mother had him committed to Wiltwyck, a school for emotionally disturbed boys.  Patterson described his experience at Wiltwyck as a turning point in his life. Wiltwyck gave him a sense of belonging. He learned how to make friends, to read and write, and was also encouraged to take up boxing.

At age 14 Patterson began working out in a Manhattan, New York gym operated by the noted trainer Gus D’Amato. In 1950 he began boxing as an amateur and one year later captured the New York Golden Gloves middleweight championship.  He repeated the feat in 1952 before winning a gold medal in the 1952 Olympics held in Helsinki, Finland.

Capitalizing on his Olympic success Patterson turned professional and worked his way up the ranks, while growing into the heavyweight fight category at a relatively light 180 pounds.  By the time the reigning heavyweight champion Rocky Marciano retired Patterson was a leading heavyweight contender.  He was matched to fight Archie Moore for the vacant title. Patterson knocked Moore out in the fifth round of their November 30, 1956 contest to become the youngest heavyweight champion in history at that time at 21 years of age.

Patterson successfully defended the title four times before suffering a defeat to Sweden’s Ingemar Johansson in 1959. He avenged the defeat a year later and became the first heavyweight in history to regain the title when he knocked Johansson out in the fifth round of their rematch. He went on to capture the rubber match with a six round knockout in 1961.

Patterson lost the title a second time when he was knocked out in the first round of a September 1962 fight against Sonny Liston. His attempt to recapture the title from Liston ten months later resulted in another first round knockout defeat. Patterson received two more opportunities to regain the title, but was defeated by Muhammad Ali in 1965, and then lost a controversial 15-round decision to Jimmy Ellis for the WBA heavyweight title in 1968.

Floyd Patterson retired from boxing in 1972 at age 37 with a professional career record of 55 wins, 8 losses, and one draw. He remained active in the sport in retirement, first as a trainer, and eventually as chairman of the New York State Athletic Commission. Patterson suffered from Alzheimer’s over the last eight years of his life, ultimately succumbing to the disease on May 11, 2006 at age 71 in New Paltz, New York.  Floyd Patterson was inducted into International Boxing Hall of Fame in 1991.