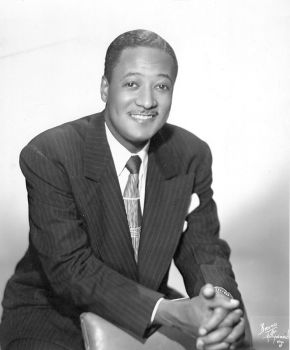 Saxophonist, bandleader and songwriter Paul Williams was a performer at The Moondog Coronation Ball in Cleveland in 1952, considered to be the first rock concert. He has been recognized as a pioneer in the American music industry.

Paul Williams was born on July 13, 1915 in Lewisburg, Tennessee. His parents were Will E. Jones and Flora Williams.  His family moved to Bowling Green, Kentucky when he was two and to Detroit, Michigan when he was 13. Williams learned to play the saxophone after his mother gave him one as a Christmas gift when he was 15.  He honed his craft thru private lessons, playing in his high school ensembles and eventually performing in gigs at Detroit clubs.

In 1948, at the age of 33, Williams recorded “The Hucklebuck,” an instrumental considered by many music historians to be an important precursor to rock ‘n’ roll. At a time when record companies promoted “race” records only among African Americans, Williams’ song became a major crossover hit among both black and white audiences. “The Hucklebuck” stayed at the top of the charts for 32 weeks, and from that point on he was known as Paul “Hucklebuck” Williams.

By the early 1950s Paul “Hucklebuck” Williams and his Orchestra were regularly featured at the Apollo Theatre in Harlem. They were the backup band for artists such as Big Joe Turner, Dinah Washington, Amos Milburn and Ruth Brown. They were also featured in the Apollo Theater’s film Rhythm and Blues Revue (1955).

On March 21, 1952 Paul “Hucklebuck” Williams and his Orchestra became a part of rock ‘n’ roll history when they performed at The Moondog Coronation Ball at the Cleveland Arena, promoted by disc jockey Alan Freed. This is often considered to be the music industry’s first rock concert. Because of rampant gate crashing and overcrowding, fire marshals stopped the Coronation Ball shortly after it began. The Orchestra was the only act that performed that night.

By the 1980s Williams’ contributions to the rise of a new musical genre were increasingly recognized by music historians and fans. In 1986 he participated as a guest speaker, panelist and performer at a Smithsonian Institution symposium entitled “Rhythm and Blues: 1945-1955,” held at the National Museum of American History.

In 1992 Williams received three important honors. He was invited back to Cleveland where he participated in the 40th Anniversary Celebration of Alan Freed’s Moondog Coronation Ball and was honored with a resolution of welcome from the Cleveland City Council. The Rhythm and Blues Foundation honored Mr. Williams with their Pioneer Award in recognition of his artistry and lifelong contributions to rhythm and blues music. Also in December of the same year, The Paul Hucklebuck Williams story was featured in a Life magazine special issue on 40 years of rock ‘n’ roll.

Paul Williams married Evelyn Webb on September 16, 1935. They had two sons, Paul and Earl.  Williams also had a son and daughter, Eric and Erin, from a relationship with Erma Atkins.