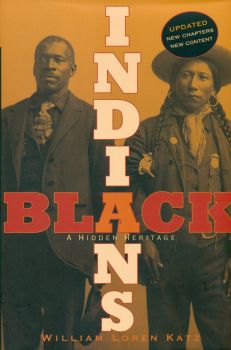 William Loren Katz has devoted his life to researching and writing African American history.  In the following account written to describe the reissue of one of his most successful books, Black Indians, he describes how he became an historian of African America and particularly the black West.

The personal sojourn that led to a book named Black Indians began in the 1930s with my father, Ben Katz, who fell in love with African American blues and jazz music. He first had a large 78-rpm record collection, and then a large collection of African American history books. I had to be one of the few white kids who went to bed listening to Bessie Smith, Sidney Bechet, and Louis Armstrong, and woke up surrounded by the writings of Frederick Douglass, W. E. B. Du Bois, and E. Franklin Frazier. At a very early age Dad took me to Harlem’s Schomburg Center for Research in Black History and Culture, which he considered sacred ground. He also organized jazz concert benefits for the United Negro and Allied Veterans of America, so I met Sidney Bechet, James P. Johnson, and a niece of Bessie Smith in our living room. Bunk Johnson sat at our table at the Stuyvesant Casino, and jazz clarinetist Mezz Mezzerow introduced me to Louis Armstrong after his 1947 Carnegie Hall concert.

I also began to fall in love with jazz, blues, and this history. Dad helped found the Committee for the Negro in the Arts with Charles White, Frank Silvera, Ernie Critchlow, Walter Christmas, and others. Walter, Ernie and Dad became best friends, and I got to meet stimulating men and women of color. Before I joined the US Navy in 1945, my senior high-school thesis was a two-hundred
page history of jazz—best described as amateurish, emotional, and well illustrated.

My fourteen years as a New York public school teacher were spent “bootlegging” my new knowledge into my social studies classrooms–my effort to offset the appalling omissions and distortions of the state curriculum and its approved textbooks. By 1967 a small New York publisher agreed to issue my Eyewitness, a Black history text based on my research and classroom experiences. I had written to Langston Hughes asking for permission to use several of his articles, and one evening in late 1966 my phone rang. “What kind of book is it?” he asked. I explained it was a Black history book for young people and schools. His response was immediate and firm. “Don’t leave out the cowboys!” I think he said it twice.

“Good, good,” he said. “That’s very important.” I had his permission.

But I had something more. His five words changed my life. I knew the great poet of urban America had grown up in Lawrence, Kansas, and named after his great-uncles, John Mercer Langston, a frontier lawyer who defended Underground Railroad agents in Ohio, and his brother, Charles Langston, one of Oberlin’s agents. Another ancestor was Lewis Sheridan Leary, an Oberlin College student who fought and died with John Brown at Harpers Ferry. Langston Hughes also could trace his ancestry back to Pocahontas.  My eyes were opening to a new kind of frontier.

I also became drawn to the pioneering research on Africans and Indians on America’s frontiers by Kenneth Wiggins Porter, a white Harvard-trained professor. In 1968, when a New York Times company asked me to serve as general editor of 212 African American history classics, I asked Porter to select his best essays for his The Negro on the American Frontier. It appeared in 1971, as did my The Black West. After Professor Porter’s death in 1981, his wife made me curator of his unpublished manuscripts, and I quickly found them a home at the Schomburg Center in New York’s Harlem.

Meanwhile faces of Black Indians—Apaches, Kiowa, Cherokees, Seminoles, and others—peered from the antique photographs I had gathered for The Black West. I was looking at America’s first Freedom Fighters, our first and largest Underground Railroad, and our first Rainbow Coalition. My proposal for a book on Black Indians brought a single publisher response: Athenaeum’s young adult editor Marcia Marshall.

Rules of the day for young adult books had advantages: It had to be written clearly and informally, use historic illustrations, explain important concepts, minimize “scholarship,” omit footnotes, and remain under two hundred pages. These also proved disadvantages. Many Black Indians readers rightly wanted more evidence, scholarship, and deeper coverage than 198 pages allowed. Then there were US boards of education limitations, such as minimal coverage of Latin America. The final product bent a few rules by using vivid original sources and antique engravings and photographs as evidence, and slipped in a lot more on Latin America.

This new and expanded edition has given me a chance to offer far more information, documentation, photographic evidence, and introduce many events and intrepid Americans of color. No longer limited in pages, I have been able include such heroic figures as Hatuey who faced death by fire in 1512, and still defied Spain’s soldiers and missionaries. Here are the stories of African translators Prince Henry introduced to exploration before Columbus sailed west to the new world, men such as Matthew Da Costa and Jan Rodriguez who cemented trade and peaceful relations with Native Americans from Manhattan to the broad plains of the southwest.

Here was the space to tell the story of Pope’s Revolt of 1680 that united Africans and Pueblos, drove Spain’s colonial forces from Santa Fe, and restored Pueblo home rule for a dozen years. And room for the Black Indian freedom fighter, Isabel de Olvera who in New Mexico in 1600 first said, “I demand justice.”

This edition provides an opportunity to reveal the sorrowful tasks assigned frontiersman James Beckwourth during the infamous Chivington massacre of 1864. It permits a deeper analysis of the Buffalo Soldiers’ painful dilemma that had Sgt. Major George W. Williams refusing to wage war on Native Americans. Here was a chance to detail the courage of such African American women as Mary Fields, Clara Brown, and Lu Lu Mae Sadler Craig whose concern for Native Americans sharply contrasted with government officials bent on a final solution. Here are the stories of African Americans in Congress who took public stands for Indigenous people that defied white political imperatives and frontier greed.

This volume offered an opportunity to reveal the seven year guerilla war waged in North Carolina by the multiracial Lowry Band against the Confederacy, and then the Ku Klux Klan. Here is the courageous George Henry White, a Black Indian youth who attended school near the Band, and rose to become an eloquent Congressman who in 1900 introduced the first federal anti-lynching bill. Here is the tale of the ultimate outsider, Lucy Gonzales Parsons, a former slave who, first battled the Klan in Texas, then became the first radical woman of color agitator to reach a world-wide audience. Writer, speaker and organizer, she tirelessly labored to unify working women and men into unions and argue for socialism. Though she initially advocated violence, in 1905 she made a unique and lasting gift to the philosophy and practice of nonviolence.

Perhaps most important to many readers, this expanded volume has allowed coverage of current issues as peoples of color confront the 21st century, including cases currently winding through federal courts because some Seminole and Cherokee leaders are seeking to remove members with African ancestry from citizenship rights (but not those with white ancestors). There are discussions of how the two peoples who could have marched along the same road sometimes took separate or tangled paths. The heated days of the civil rights movement, the Black Power movement, the American Indian Movement did not always unify two peoples. As the 20th slipped into the 21st century different approaches to integration and separation were expressed by new leaders Dennis Banks, Ceasar Chavez, Martin Luther King, Jr., Malcolm X, Stokely Carmichael, Vine Deloria, Dick Gregory, Dr. Jack D. Forbes, Louis Farrakhan, Leonard Peltier, Mumia Abu Jamal.

The original readers of Black Indians kept it in print for a quarter of a century. This expanded and updated edition allows new a generation a chance to learn about what had been a buried history and to meet some daring American men and women who never made it into our traditional history texts.