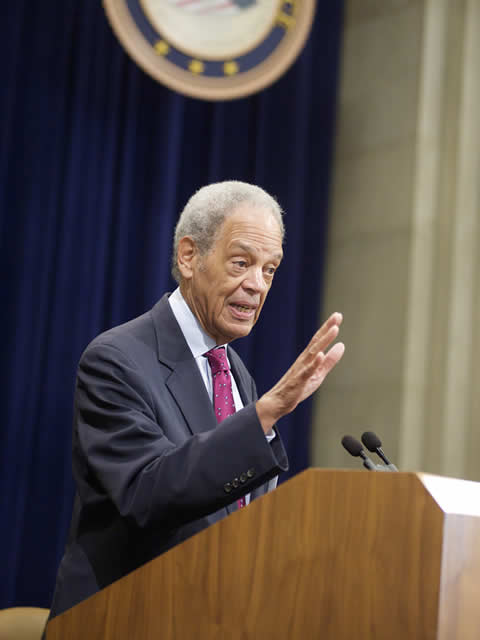 Attorney, civil rights activist, journalist, and historian, Roger Wood Wilkins was born in Kansas City, Missouri, to Earl and Helen Jackson Wilkins on March 25, 1932. His father was a business manager for the Kansas City Call newspaper, and his mother was the first black president of the Young Women’s Christian Association. After his father’s death in 1941, Wilkins and his mother moved to New York City and lived near relatives in Harlem, one of whom was his uncle Roy Wilkins, who later became executive secretary of the National Association for the Advancement of Colored People (NAACP). Wilkins’s mother remarried in 1944, and the family relocated to Grand Rapids, Michigan. Roger earned a bachelor’s degree from the University of Michigan in 1953 and then attended the university’s law school where he served as an intern for Thurgood Marshall, executive director of the Legal Defense and Educational Fund of the NAACP and later the first African American justice of the United States Supreme Court. Wilkins received his degree in 1956 and practiced law in New York City for several years.

In 1966, President Lyndon B. Johnson appointed Wilkins assistant attorney general and placed him in charge of the Community Relations Service, an agency established under the 1964 Civil Rights Act. He met with mayors and civic leaders and called for more jobs and housing for African Americans who lived in neglected and impoverished neighborhoods. Wilkins left government service and joined the Ford Foundation in 1969, where he oversaw funding for drug rehabilitation, job training, and education for the poor.

In 1972 ,Wilkins started a new career in journalism, writing for the Washington Post. In 1973 the newspaper received the Pulitzer Prize for Public Service for exposing the Watergate scandal that forced President Richard M. Nixon to resign from office. Members of the Pulitzer board cited the investigative work of reporters Carl Bernstein and Bob Woodward and the newspaper’s editorials, many of them written by Wilkins.

Wilkins joined the New York Times in 1974. He was the first African American on its editorial board and later worked as an urban-affairs columnist. He left the Times in 1979 and served as associate editor and writer for the Washington Star for two years. In 1982 Wilkins became a senior fellow at the Institute of Policy Studies in Washington, D.C. There he helped establish the Free South Africa Movement, which led to U.S. sanctions against apartheid in South Africa.

Wilkins served on the board of the NAACP Legal Defense Fund, chaired the Pulitzer Prize Board, and was a member of the PEN/Faulkner Foundation, a literary association that promoted reading and writing.

In 1988, Wilkins became a professor of history and American culture at George Mason University in Fairfax, Virginia. During the 1990s, he contributed writings on society and politics to many journals, magazines, and newspapers. He also spoke frequently as a commentator on radio and television.

In 2001, Wilkins wrote Jefferson’s Pillow: The Founding Fathers and the Dilemma of Black Patriotism, a widely acclaimed study describing the contradictions between the ideals of the Founding Fathers from Virginia and their ownership of black slaves. He also published The Crisis, the journal of the NAACP, for several years.  Wilkins retired from teaching in 2007.

On March 26, 2017, Roger Wilkins died at a nursing home in Kensington, Maryland, at the age of eighty-five.  He was survived by his wife, Patricia A. King, one son, two daughters, two half-sisters, and two grandsons.