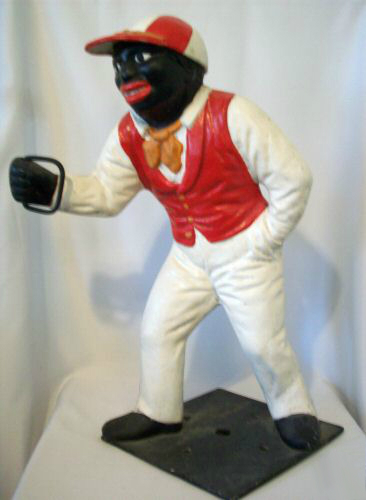 Jocko Graves was a young African American boy whose service during the American Revolutionary War earned him the commemorative statue, the “lawn jockey.”

Graves’s story is a short and tragic one. It begins on Christmas Eve, December of 1776, with General George Washington’s crossing the Delaware River to battle the British Army.  A local African American man, Tom Graves, answered the call for local militia men to fight in the general’s army. Graves’s son, Jocko Graves, was only twelve years old, but he followed his father into the army, ready to fight the enemy. General Washington, upon hearing about young Jocko, was astonished at his readiness to engage in battle.

The general, however, deemed Jocko Graves too young to be involved in battle and ordered him to tend to officers’ horses and keep a lantern burning, so the soldiers would know how to return to camp after the fighting ended. Meanwhile, General Washington and his army boarded boats and began the crossing of the icy Delaware River. A blizzard that night delayed some of Washington’s solders from making the crossing with the main body, and two soldiers died of hypothermia before reaching the Christmas Day battle the next morning.

On December 26, the following day after Washington’s victory over the British, the general returned to find that young Jocko Graves had frozen to death in the spot where he was ordered to stand watch with the lantern still burning in his clenched frozen hand. Washington was so moved by the boy’s dedication that he commissioned a statue of “The Faithful Groomsman” to stand in honor of Graves at the General’s estate in Mt. Vernon.

Over time, the statue’s original form changed, and its origin story was forgotten. The statue became known as “The Lawn Jockey” and by the mid-nineteenth century was usually depicted as the racial “Sambo” character, with very dark skin and big protruding lips. It was also often used as a hitching post for horses and made out of cast iron, while others were used as ornaments for front lawns.

Some accounts claim that the statue was used to signal Underground Railroad station stops. According to these accounts, an American flag in the hand of the statue signaled runaway slaves that it was safe to stop at that home. Also, dressing the statue in a striped shirt meant that a fugitive slave could obtain a horse. A blue sailor waistcoat meant the station master could deliver the fugitive to a port and a ship.

Contemporary historians now describe the origins and ironic uses of the lawn jockey statue as a testament to the memory of Jocko Graves. The National Great Blacks in Wax Museum in Baltimore, Maryland, features one of the earliest surviving versions of the statue.

Virginia Kruta, “They Told Her That Her Yard Lantern Was Racist. Well,
She Sure Set Them Straight,” Independent Journal Review, March 2016,
http://ijr.com/2016/03/565154-yard-lantern-racist/; Waymon Lefall,
Jocko, A Long Way from Home Down Under (New York: Page Publishing,
2014); Waymon Lefall, The Legend of Jocko, Child Hero of The American
Revolution (New York: Page Publishing, 2003).