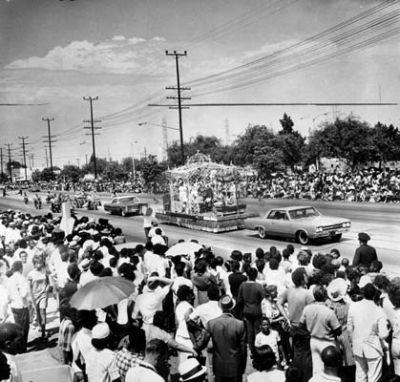 A coalition of antipoverty organizations and black nationalist groups initiated the Watts Summer Festival in 1966 as a way to focus the Watts community on celebrating black heritage and culture annually on the anniversary of the Watts riots.  Although the groups involved in establishing and organizing the festival had differing styles and philosophies – some were cultural nationalists, some emphasized economic nationalism and others focused on political power – they all supported the ideals of community empowerment and self-definition.  New organizations such as SLANT (Self-Leadership for All Nationalities Today), the Afro-American Cultural Association, the Sons of Watts Improvement Association and the Black Man’s Self-Image Development Institute appeared in 1965 or 1966 and actively participated in the Watts Summer Festival in the late 1960s.

The festival featured informational booths highlighting the services of various public and private antipoverty agencies, such as the Westminster Neighborhood Association and the Watts Labor Community Action Committee (WLCAC).  The festival activities centered on celebrating black culture.  Musical acts such as US Organization boot dancers, Zulu dancers, and trumpeter Hugh Masekela, and arts and crafts booths demonstrating and selling African jewelry and clothing entertained largely black audiences of anywhere from thirty to over one hundred thousand people at the festival during the late 1960s.  The festival parade, featuring a celebrity grand marshal and the winner of the Miss Watts beauty contest, was the highlight of the celebration.  Organizers chose Sargent Shriver, the director of the War on Poverty, as the first grand marshal in 1966.  Muhammad Ali served as grand marshal in 1967.

The Watts Summer Festival and Parade flourished into the 1970s.  Over 100,000 people celebrated the festivals in 1972 and 1973.  They continued to focus on black culture and pride.  The 1973 festival featured Jesse Jackson giving his “I Am Somebody” speech, dressed in an African dashiki.  Festival attendance declined in the mid-1970s and disappeared altogether for a few years before reappearing in 1979.  Despite ups and downs in attendance and participation, the Watts Summer Festival and Parade had helped restore a sense of community and cultural pride to the residents of Watts.  It remains the most significant representation of black cultural nationalism in Southern California.