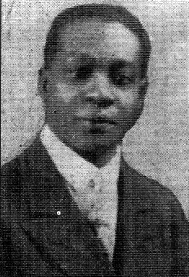 Carter W. Wesley, newspaperman and political activist, was born in Houston, Texas, on April 29, 1892, to Mable (Green) and Harry Wesley.  He graduated from the public schools of the city and earned a B.A. degree at Fisk University in Nashville in 1917.  Shortly thereafter, Wesley joined the army and became one of the first black officers in the United States military.

Upon his return to civilian life, Wesley earned a law degree from Northwestern University in Evanston, Illinois and relocated to Oklahoma City, Oklahoma. After four years of legal practice in Oklahoma City, Wesley returned to Houston in 1927.   Finding his legal practice in Texas limited because of his race, he became a businessman and bought into a newly formed publishing company which owned the Houston Informer.  For several years, he served as auditor, vice president, treasurer and general manager of the Informer.  By 1934, he became publisher of the newspaper.  The Houston Informer at one time had a state-wide circulation of over 45,000.

Carter Wesley used the Houston Informer as a podium from which to battle racism and to speak on behalf of African Americans. He used the paper, for example, to publicize the battle against the white Democratic primaries that effectively denied blacks the right to vote.  That battle was won in 1944 when the United States Supreme Court in Smith v. Allwright granted Texas blacks the right to participate in those primaries.   Thereafter Wesley urged black men and women to pay their poll taxes, vote, and fight for equal rights.

Wesley spent the remainder of his life engaged in a public campaign on against racial discrimination behalf of African Americans in Houston and across Texas.  His weapons ranged from boycotting to fundraising but they all sought the same goal.  Wesley was married to Dorris Wooten and together they had three children.  Carter W. Wesley died in Houston on November 10, 1969, and is buried in Paradise Cemetery North.