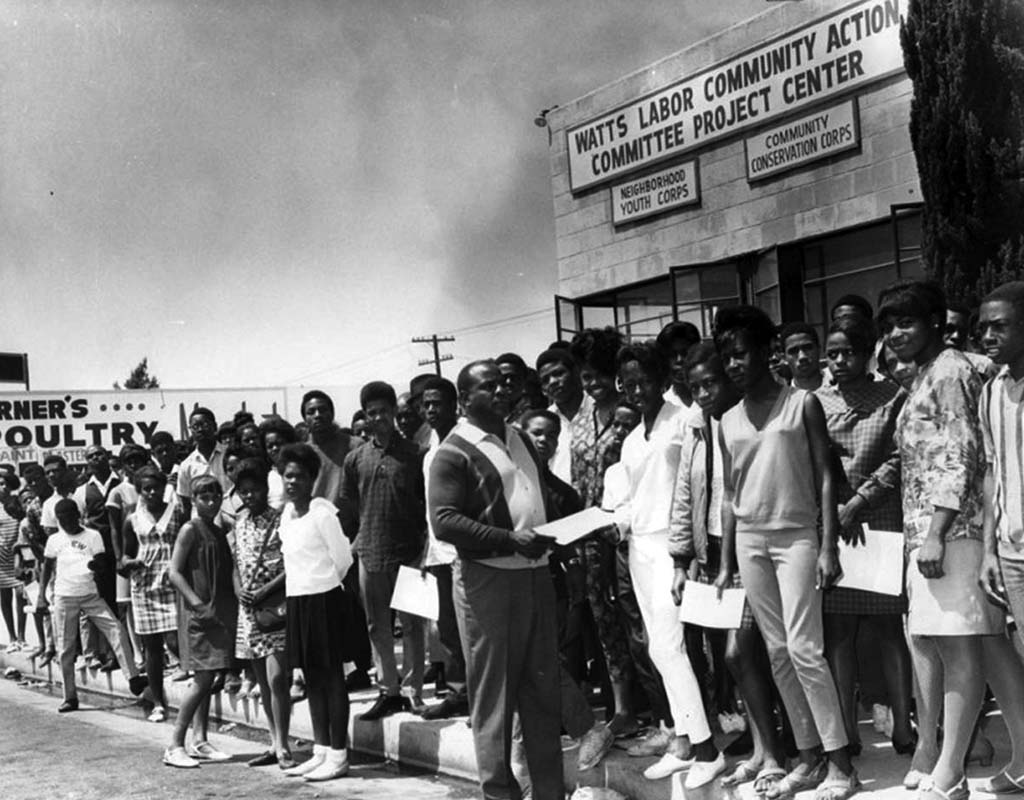 Born into poverty and racial segregation in Meridian, Mississippi in 1912, Ted Watkins became a civil rights and union activist and led an anti-poverty agency in Los Angeles, the Watts Labor Community Action Committee (WLCAC).  Watkins left Mississippi as a young man to avoid a lynching and headed west to the thriving metropolis of Los Angeles.  After arriving in Los Angeles, Watkins began working for Ford Motor Company and joined the local United Auto Workers (UAW) chapter.  He rose through the union ranks and by the early 1950s had become an international representative for UAW.  Watkins and his wife, Bernice, also became active in the United Civil Rights Committee, a Los Angeles civil rights organization, and the Watts chapter of the National Association for the Advancement of Colored People (NAACP).

In 1965, the UAW helped form the WLCAC, a community action agency of the War on Poverty.  Ted Watkins, with his union and civil rights activism and experience, was the logical choice to head the new organization.  Watkins’s presence at the forefront of the WLCAC provided an important link between civil rights, labor organizing and community activism.  His desire, hard work and organizational abilities led WLCAC for almost thirty years.

Watkins developed a variety of anti-poverty programs at WLCAC.  One, the New Deal-like Community Conservation Corps, used teenagers to convert vacant lots into playgrounds and provided educational classes where students learned about black heritage and culture.  In the 1970s, the WLCAC became a Community Development Corporation (CDC) with the goal of the economic regeneration of the community.  As a result, many of the WLCAC programs emphasized community control of economic resources.

Ted Watkins died in November 1993.  His legacy, the WLCAC, continues to fight poverty in Watts.

Robert Bauman, Race and the War on Poverty: From Watts to East L.A.
(Norman: University of Oklahoma Press, 2008); Robert Bauman, “The Black
Power and Chicano Movements in the Poverty Wars in Los Angeles,”
Journal of Urban History, 33:2 (January 2007), 277-295.