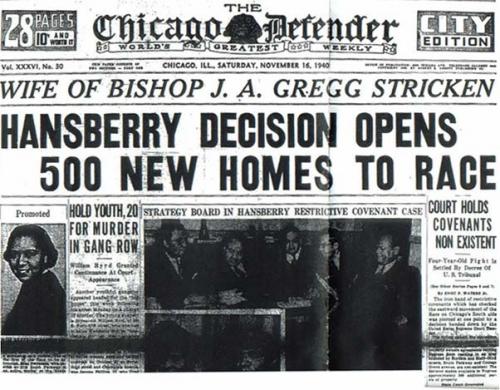 The Chicago Defender was founded in 1905 by Robert Sengstacke Abbott.  Abbott published the first issue, a run of 300 copies, on May 6, 1905.  The Defender began as a four-page weekly handbill filled with local news and reproductions of clippings from other newspapers.  Abbott initially sold both subscriptions and advertising for the paper himself by going door-to-door throughout Chicago, Illinois.

Abbott used the Defender as a forum to attack racial injustice from the outset, and included a front-page heading on every issue that read, “American Race Justice Must Be Destroyed”.  The Defender was a leading advocate in the fight against racial, economic, and social discrimination.  It championed equal employment and fair housing for blacks, and boldly reported on lynchings, rapes, and black disfranchisement. What began as a four-page handbill had become by 1915 a popular local newspaper with a weekly circulation of 16,000.

The Defender, however, saw its major growth during the Great Migration and is credited as being a major catalyst for that movement of half a million blacks from the South to the North between 1915 and 1920.  Abbott used black Pullman Porters and entertainers to transport his paper across the Mason-Dixon Line.  Often after being smuggled to the South, it is estimated that many copies of the Defender were read by four to five African Americans, who passed it from person to person and read it aloud wherever blacks congregated.  Included in its pages were articles and editorials which tried to convince its oppressed southern readers to move north.  Abbott even printed copies of train schedules and job listings to entice southern blacks to relocate.  The black population of Chicago increased 148 percent from 1910 to 1920 with plenty of support and encouragement from the Defender.

Upon Abbott’s death in 1940, John H. Sengstacke, Abbott’s nephew, assumed control of the Defender.  Stengstacke continued the fight for racial equality.  On February 6, 1956, The Defender became a daily and was renamed the Chicago Daily Defender. At the time it was the largest black-owned daily newspaper in the world.  In 1965, Stengstacke purchased long-time rival newspaper The Pittsburgh Courier and added it to his chain of papers which includes The Michigan Chronicle in Detroit, Michigan, and The Tri-State Defender in Memphis, Tennessee. Sengstacke remained publisher of the Defender until his death in 1997.