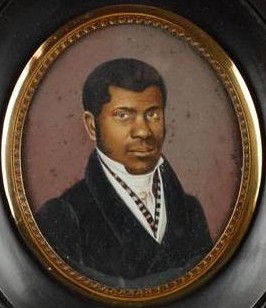 Pierre Toussaint, New York society hairdresser, devout Catholic, and wealthy philanthropist, was born a third-generation elite house slave at the Bérard family plantation in Haiti. His father’s name is not known but he took his surname in honor of revolutionary hero Toussaint L’Ouverture. His mother, Ursule, was groomed as the personal maid of the Bérard matriarch; his grandmother, Zenobie Julien, nursed the Bérard children, made five voyages to France to help them adjust to their Parisian boarding schools, and continued to work for the family long after being rewarded with her freedom.Pierre and his sister Rosalie were among the five slaves that Jean and Marie Bérard brought with them to New York in 1797.

Pierre apprenticed as a hairdresser and over the years established a lucrative business among New York’s Knickerbocker set and the city’s wealthy French émigrés. When Jean Bérard died in 1801, leaving his wife penniless, Toussaint supported Marie Bérard’s entire household with his earnings. He paid her debts, worked as her butler, and entertained her guests with piano, violin, and singing performances. He was well versed in the works of French spiritual writers Jacques-Benign Bossuet and Jean-Baptiste Massilon and believed it was his Christian duty to stand by his mistress. He continued to do so, through her marriage to another Haitian émigré, Gabriel Nicolas, and her final, terrible ordeal with tubercular laryngitis. He was manumitted at her deathbed in 1807.

Toussaint purchased his sister Rosalie’s freedom so that she could marry; then, in 1811, he married Marie-Rose “Juliette” Gaston, the daughter of former Haitian slave, Claudine Gaston. He and Juliette adopted Rosalie’s sickly infant daughter Euphemia in 1815, several months before Rosalie died of consumption. Unable to have their own children, they lavished their attentions on the little girl and gave her a superb education. They were utterly devastated when Euphemia died of tuberculosis at 14.

Pierre and Juliette devoted their lives to charitable work. They opened up their home to orphaned African American boys whom they raised, educated, and connected to apprenticeships and jobs. They provided food, clothing, and shelter to Haitian refugees. They bought freedom for many slaves. They donated generously to the first order of Negro nuns, the Oblate Sisters of Providence. They ministered to the poor and sick, black and white. Pierre, especially, was remembered for crossing barricades into a quarantined section of the city and nursing Yellow Fever victims. He visited prisons, counseled the mentally unstable, and consoled mourners.

Pierre supported his church, St. Peter’s, as well as Old St. Patrick’s Cathedral and St. Vincent de Paul Church. He helped build the first Catholic school for black children in New York. His exemplary Christian life led to a movement begun in the 1950s to have him canonized. In 1996, Toussaint was declared Venerable by Pope John Paul II. Pierre Toussaint died on June 30, 1853, and Juliette on May 14, 1851.