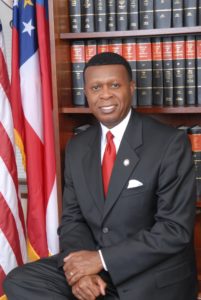 Thurbert Earl Baker is a lawyer and Democratic politician who served as the 46th Attorney General of Georgia. Baker was born in Rocky Mount, North Carolina, on December 16, 1952. He was raised by his mother Mary H. Baker on a small farm. He graduated from Rocky Mount Senior High School in 1972 and received his BA in political science from the University of North Carolina, Chapel Hill in 1975. During his time at UNC, Baker was a member of the fencing team, winning the 1975 Atlantic Coast Conference (ACC), in the individual sabre division. He also joined Omega Psi Phi fraternity. Baker moved to Atlanta, Georgia to attend Emory University School of Law and earned his JD there in 1979.

During his tenure, Baker was responsible for introducing the “Two Strikes You’re Out” program, putting the worst repeat violent released felons back in prison for life without parole. He was also a sponsor of the Helping Outstanding Pupils Educationally (HOPE) Scholarship. Hope rewards students who demonstrate academic achievement and is entirely funded by the Georgia Lottery.

Baker was appointed as the 46th Attorney General of Georgia in 1997, by Governor Zell Miller. He is the first Africa American to hold the position in the state and at the time, the only African American Attorney General in the U.S. From 2006 to 2007, Baker served as President of the National Association of Attorney Generals.

Attorney General Baker clashed in court with Miller’s successor, then Governor Sonny Perdue, a Republican, in 2003, with both claiming the right to control the state’s legal affairs. The Supreme Court of Georgia ruled 5-2 in favor of Baker, stating that the Attorney General is independent of the Governor and has the power to control the state government legal affairs. The two clashed again in 2010, when Baker denied the Governor’s request to sue the Affordable Care Act, enacted by the 111th Congress under President Barack Obama.

Baker ran for Governor of Georgia in 2010 but was defeated in the Democratic primary by former Gov. Roy Barnes, but Barnes was later defeated in a Republican sweep of statewide offices that year. Baker was re-elected Attorney General three times and served for thirteen years under three separate Governors. He left office on January 10, 2011.

Baker was the recipient of the first annual Barack Obama Political Leadership award from the National Bar Association in 2009. He has been recognized as one of “America’s Top Lawyers” by Black Enterprise magazine and has been a longtime board member of the Dekalb County Library and the National Medical Society at Emory University. He lives in Stone Mountain, Georgia with his wife Catherine, and two daughters, Jocelyn and Chelsea.