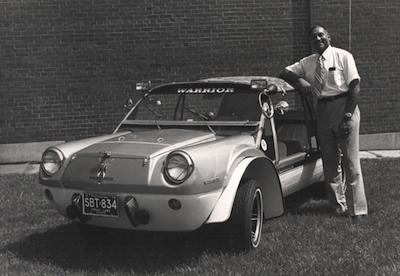 McKinley Thompson with car he designed for Africa and the Third World
Courtesy The Henry Ford Collection, Fair use image

McKinley Thompson, the first major African American auto car designer, was born on November 8, 1922, in New York City, New York. As a child, Thompson was intrigued with automobiles. In an oral history interview in 2001, he discussed the first time he had seen a car when he was twelve years old, “There were patchy clouds in the sky, and it just so happened that the clouds opened up for the sunshine to come through. It lit that car up like a searchlight.” Thompson later said, “I was never so impressed with anything else in all my life. I knew that that’s what I wanted to do in life—I want[ed] to be an automobile designer.”

In 1940 Thompson graduated from Murray Hill High School in New York City. Following high school, Thompson became a professional draftsman to hone his drawing skills. When the United States entered World War II in 1941, Thompson joined the U.S. Army and began working as an engineering design layout coordinator for the Army Signal Corps, a post he held until 1953.

In September 1953, Thompson entered a national design contest sponsored by Motor Trend magazine called “From Dream to Drawing Board to?” Contestants were assigned to develop an automobile design that could be used for potential future automobiles. Thompson’s design, a lightweight plastic car with a turbine engine and extra passenger space, won one of the five scholarships being offered. This, in turn, allowed Thompson to attend Art Center College of Design in Los Angeles, California. He was the first African American to enroll in its prestigious Transportation Design Department.

After completing his Bachelor’s in Industrial Design in 1956, Thompson began work at the Ford Design Center with Alex Tremulis, the designer known for the famous Tucker automobile. Thompson worked in the Ford Advanced Studio, a unique job where designers could work without any creative restrictions. Here, Thompson developed unique and creative concept sketches, the best known of which was the Ford Gyron, a three-wheeled, two-passenger show car with a unique sleek aircraft-like body shape.

During his time at the Ford Advanced Studio, Thompson offered ideas for everything from the well-known Mustang and Thunderbird models to concept vehicles. In 1962 Thompson’s unique inspiration led to his receiving the Ford Motor Company Citizen of the Year Award. Thompson continued to move up the ranks in the company until he eventually became manager of the Appearance Development and Feasibility Design Modeling Department in August 1976 at the Ford Motor Company Design Center in Dearborn, Michigan.

In 1979 Thompson began focusing on inspiring the younger generation, much like he had been inspired as a child. A group of Ford designers, led by Thompson, produced a traveling exhibit featuring twelve African American designers from the automotive industry. They visited high schools across the nation, encouraging young people to become automobile designers.

Thompson also designed “The Warrior” a lightweight yet versatile vehicle that he hoped would be purchased and used in Africa and the rest of the Third World.

In 1984 Thompson retired from the Ford Motor Company. In 2006 Thompson died in Detroit at the age of eighty-three after a long struggle with Parkinson’s disease.