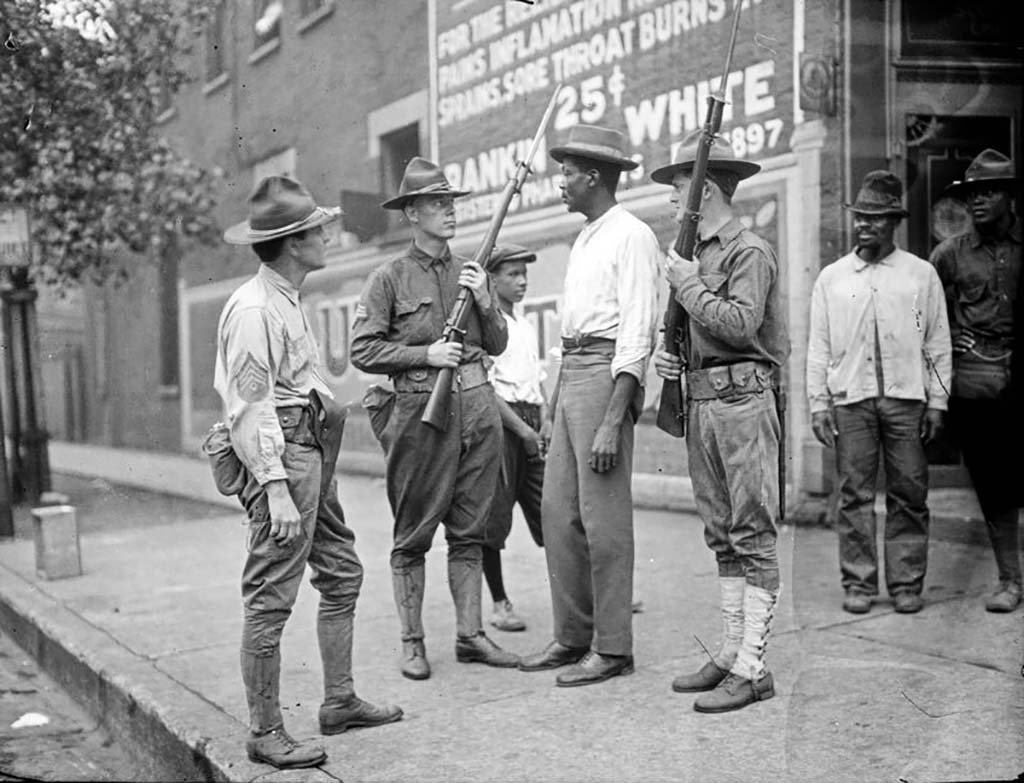 The race riot in Washington, D.C. was one of more than twenty that took place during the “Red Summer” of 1919. Lasting a total of only four days, this short-lived riot was more accurately described as a “race war” taking place in the nation’s capital.

On Saturday night, July 19, 1919, in a downtown bar, a group of white veterans sparked a rumor regarding the arrest, questioning, and release of a black man suspected by the Metropolitan Police Department of sexually assaulting a white woman. The victim was also the wife of a Navy man. The rumor traveled throughout the saloons and pool halls of downtown Washington, angering the several soldiers, sailors, and marines taking their weekend liberty, including many veterans of World War I.

Later that Saturday night, a mob of veterans headed toward Southwest D.C. to a predominantly black, poverty-stricken neighborhood with clubs, lead pipes, and pieces of lumber in hand. The veterans brutally beat all African Americans they encountered. African Americans were seized from their cars and from sidewalks and beaten without reason or mercy by white veterans, still in uniform, drawing little to no police attention.

On Sunday, July 20, the violence continued to grow, in part because the seven-hundred-member Metropolitan Police Department failed to intervene. African Americans continued to face brutal beatings in the streets of Washington, at the Center Market on Seventh Street NW, and even in front of the White House.

By the late hours of Sunday night, July 20, the African American community began to fight back. They armed themselves and attacked whites who entered their neighborhoods. Both black and white men fired bullets at each other from moving vehicles. At the end of the night, ten whites and five blacks were either killed or severely wounded.

After four days of violence and no police intervention, President Woodrow Wilson finally ordered nearly two thousand soldiers from nearby military bases into Washington to suppress the rioting. However, a heavy summer rain, rather than the troops themselves, effectively ended the riot on July 23, 1919.

In the end, several men were killed from gunshot wounds; nine were killed in severe street fights; and an estimated thirty or more eventually died from other wounds they received during the riot. Over one hundred and fifty men, women, and children were beaten, clubbed, and shot by both African American and white rioters. Six Metropolitan Policemen and several Marine guards were shot during these riots. Two of those shootings were fatal.