The Wake-Robin Golf Club (WRGC) was the first and is the oldest African American women’s golf club in the United States. It was founded on April 22, 1937 in Washington, D.C. by Helen Webb Harris, a school teacher. The WRGC is named after the wake-robin wildflower that sprouts in early spring. This flower symbolizes the women of WRGC budding against social norms barred them from the game of golf which was predominately played by white men during the time.

The first meeting for the Wake-Robin Golf Club was held in the home of Helen Webb Harris. Thirteen other women attended. Many, like Harris, were the wives of members of the all-Black and all-male Royal Golf Club in Washington. With few leisure activities for middle-class Black women at this time in the Washington D.C. area, they were all drawn to the game of golf. Most of these early meetings were spent going over literature about the rules of golf.

When the WRGC was founded in 1937, golf courses were segregated; Black men and women were legally prohibited from both private and public golf courses across the country. In 1938, the WRGC and their brother organization, the Royal Golf Club, petitioned to have public golf courses desegregated in Washington. Since the National Park Service controlled golf courses in the District of Columbia, Secretary of the Interior Harold Ickes approved the building of a 9-hole golf course at an old trash dump site. Langston Golf Course was built in 1939. 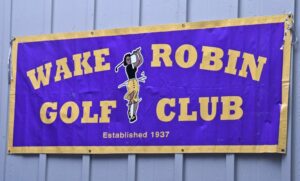 Both the Wake-Robins Golf Club and the Royal Golf Club continued to fight for the desegregation of other public facilities in Washington and in 1941 Secretary Ickes opened public golf courses to all in 1941. This resulted in the Wake-Robin Golf Club’s mission shifting towards the promotion of Black women’s interest in golf and encouraging them to become golfers. The Club also promoted inclusiveness and diversity as well as volunteer service. They encouraged young Black golfers to seek golf scholarships and enroll in associated programs.

This club is now a non-profit corporation that provides women with the help and support to allow them to develop the knowledge and skills necessary for amateur competitive golf events. They hold fundraising activities and public functions throughout the year generating proceeds which are then used to provide scholarships to young college-bound Black women. They also provide support for local charitable organizations and causes, including food drives, a family crisis center, and the Adopt-a-Highway program in Maryland.