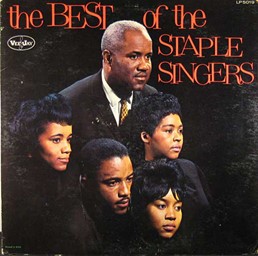 Legendary composer, lyricist, guitarist Roebuck (Pop) Staples, born on December 28, 1914, in Winona, Mississippi, and his wife, Oceola Staple, a pianist from Louisville, Mississippi, was born on September 10, 1917, The couple met as children at the Rosenwald’s Little Red Schoolhouse in Drew, Mississippi and married in 1933. Their first children, Cleotha (April 11, 1934) and Pervis (November 18, 1935), were born in Sunflower County, Mississippi. The family left the south for Chicago, Illinois, in 1935. There, Yvonne and Mavis were born on October 23, 1937, and July 10, 1939, respectively.

The couple taught their children piano and voice in the early 1950s and in 1954, the ensemble received a contract with the United record label cutting the single “Sit Down Servant.”  In 1957 the ensemble now called, The Staple Singers, signed with Stax Records. It took more than a decade however before they had a top-selling hit. Their composition, “Respect Yourself” from the album, Be Attitude: Respect Yourself, peaked at #12 in 1971 on Billboard Hot 100 #2 on the Hot Soul Singles chart. It remained on the chart for 14 weeks and became a civil-rights anthem. That same year “Heavy Makes You Happy (Sha-Na-Boom Boom)” peaked at #27 and was on the charts for 12 weeks.  The following year, 1972, “I’ll Take You There” reached #12. “This World” peaked at #38 and remained on the chart for seven weeks and went Billboard Mainstream Top 40. In 1973, “If You’re Ready (Come Go with Me)” peaked at #9 on the Billboard Hot 100 Singles and remained on the chart for 12 weeks, while “Let’s Do It Again” peaked at #1 and stayed on the chart for 15 weeks. “Let’s Do It Again” from the score of the 1975 movie of the same name, starring Sidney Poitier, Bill Cosby, and Jimmy Walker, was the last hit by the ensemble.

In 1992, the Rhythm & Blues Foundation honored the Staple Singers with a Pioneer Award. In 1994, at the 37th Annual GRAMMY Awards, the Staple Singers’ solo album Father Father, featuring Roebuck (Pop) Staples, the patriarch of the family, won a Grammy Award for Best Contemporary Blues Album – or Contemporary Blues Recording. In 1998, the ensemble received a National Heritage Fellowship from the National Endowment for the Arts. In 1999, the Staple Singers were inducted into the Rock and Roll Hall of Fame and three years later (2002), their single, “Respect Yourself,” was inducted into the Grammy Hall of Fame. The Staple Singers earned the Lifetime Achievement Award from the Recording Academy of America in 2005. In 2010 “Respect Yourself” was ranked #468 on the Rolling Stone list of the 500 Greatest Songs of All Time.

In 2017, the renowned group was placed in the Blues Hall of Fame and the following year (2018), the Staple Singers were inducted into the Gospel Music Hall of Fame. Also, in 2018 Mavis Staple received an honorary degree from Delta State University in Cleveland, Mississippi.