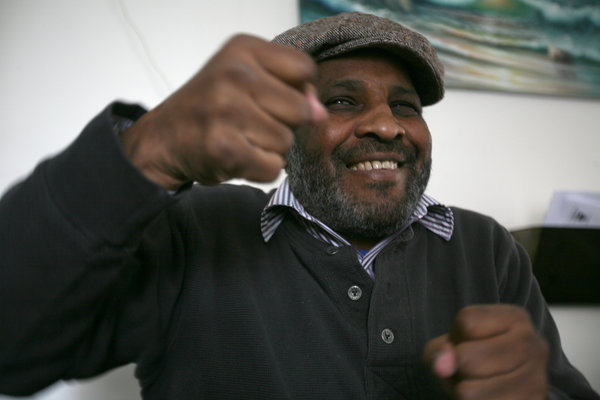 Laviera was a Cangrejero who attended Jesusa, Manuel Cuevas Bacener, Padre Berrios, and San Juan Bosco in Cantera schools before departing to New York City. Within months of his 1960 arrival, his Lower East Side (Loisaida) fifth-grade Catholic schoolteacher refused to call him Jesús because he was Black and did not speak English, thus his middle name held. Hurt by the slight, he instead affixed “Tato,” bestowed by his brother, Pablo. A 1968 honors graduate of Seward Park High School, Tato briefly attended Cornell University and Brooklyn College.

As president of the New Jíbaro Democratic Club (1974-1981), Tato secured Loisaida US Post Office formal recognition, and in 1976 marshaled 100 activists to seize the offices of Gouverneur Hospital, holding its corporate executives hostage. The successful protest prevented the planned closing of the only multilingual medical facility within walking distance for 250,000 Loisaida residents. Tato affirmed that the US Civil Rights and Black Power Movements “gave us a sense of transforming el discurso. It gave us an attitude and a mood by which to negotiate and fight.”

Tato was inspired to write during his formative years after personally meeting Afro-Puerto Ricans Juan Boria, Cortijo y su Combo, Luis Palés Matos, Clemente Soto Vélez, and Jorge Brandon. An early member of the Nuyorican Poets Café, his books, La Carreta Made a U-Turn, Enclave, AmeRícan, Mainstream Ethics, and Mixturao, all engage in bilingualism—Spanglish—the exploration of Negrismo and Afro-Caribbean cultural identity, women’s rights, and inner-city life. His plays include La Chefa, Here We Come, Becoming García, King of Cans, and Piñones, the latter honoring Roberto Clemente. “AmeRican” is the most anthologized Puerto Rican poem and many of his works are part of the Latinx literary canon. La Carreta was the first Arte Público publication and Tato helped the press become the largest publisher of US Latinx authors. Tato is in Birthwrite, Los dos mundos de Angelita, and The Browning of America films.

Blinded in 2004 due to diabetes, Tato underwent successful brain surgery in 2009, but slipped into a diabetic coma in 2013 and did not recover. He died at Manhattan’s Mount Sinai Hospital on November 1, 2013 at the age of 62. Survived by his daughter, Ruth Ella, and his sister Ruth Sánchez who was a renowned hair stylist, founding El Yunque Oba. His multiple honors include the Long Island State University Lifetime Achievement, Comité Noviembre Puerto Rican Heritage, Puerto Rican Embassy’s Pedro Pietri Hand, and American Book awards. Artist Don Rimx created a Tato-depicted wall mural memorial at East Harlem’s Taíno Towers, which was his last residence. He has a theatre named in his honor, and its 123rd street corner was renamed Jesús “Tato” Laviera Way.