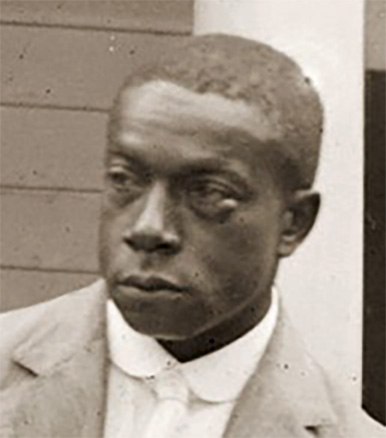 John Johnson, who is described as Lincoln, Nebraska’s long-forgotten photographer, was well known for his photography of the African American Community of his time. Johnson was born in Lincoln in 1879, the son of enslaved people. Johnson’s father was a Civil War veteran and his mother was a runaway slave.

After graduating from Lincoln High School in 1899 he attended the University of Nebraska for several semesters but did not receive a degree. Johnson worked numerous jobs including being a drayman and a janitor at the Lincoln Post Office. He married a widow, Odessa Prince, in 1918 but the couple had no children.

From 1910 until 1926 Johnson worked as a photographer, producing hundreds of unique photos in Lincoln, Omaha, and Kansas City, Missouri. His black-and-white photos include parades, family portraits, train wrecks, and building sites. His photos were unique and stood out because of his expertise at creating images with high black and white contrast as well as his natural lighting skills.

Earl McWilliams, whose date of birth and death are unknown, was Johnson’s partner in photography. Like Johnson, he was a native of Lincoln. The two photographers took numerous images together but the most famous one is called “Mother’s Touch.” Another famous photo of Johnson was of his new wife Odessa, taken on their wedding day in 1918.

John Johnson was well known in his time, but he is also increasingly appreciated in the contemporary period because his images were of African Americans, a community of people who were not generally viewed as important by others, including other photographers, especially in a small western city like Lincoln, Nebraska. His images allow that small black community to be remembered.

John Johnson passed away in Lincoln, Nebraska in 1953. His wife Odessa died the same year.