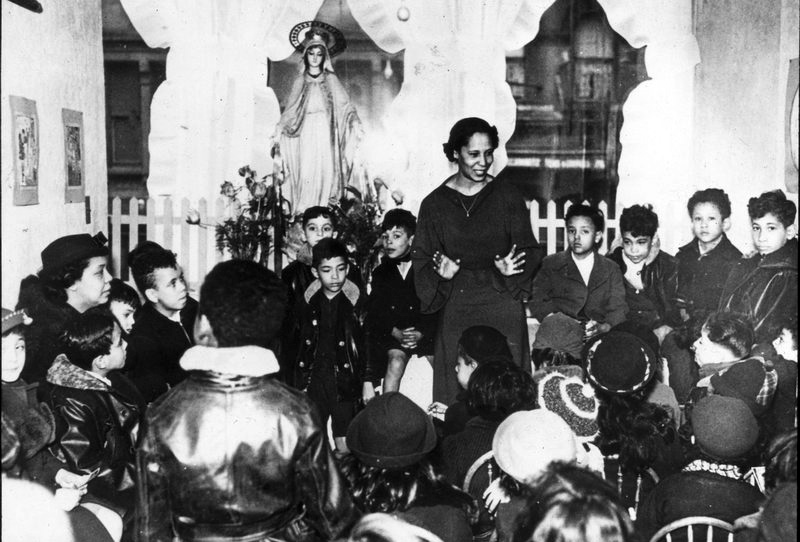 Belpré attended schools in Arroyo, Cayey, Guayama, San Juan and graduated from Santurce’s Central High School in 1919. She enrolled at the University of Puerto Rico, Río Piedras for a year before traveling to Harlem to attend her sister’s wedding where afterwards she decided to remain a Harlemite. In 1921, the New York Public Library (NYPL) hired Belpré as an assistant at the 135th Street Branch (later Countee Cullen Branch). She attended the NYPL School at 42nd St. and 5th Ave., enrolling in Mary Gould Davis’ 1926 class “The Art of Storytelling.” In 1932, Belpré studied puppetry and Latin American literature at Columbia University. She was fluent in Portuguese, Spanish, French, and English.

A storytelling of folkloric tales tradition filled Belpré’s youth, combined with the New Negro Movement, her quiet activism, and NYPL employment and classes to affirm the power of those stories for Puerto Rican children. The Harlem Renaissance increased the creative literary output of poets, novelists, and dramatists and Belpré witnessed the early stages of what is now the Schomburg Center for Research in Black Culture. All these experiences helped Belpré stress the importance of storytelling, children’s literature, and librarianship.

Belpré established the Cristobal Colón Club and collaborated with the Porto Rican Brotherhood and La Liga Puertorriqueña e Hispana to create children programs that included Nobel Prize-winning Chilean poet Gabriela Mistral and Mexican muralist Diego Rivera. These programs allowed the NYPL to become a meeting space for leading intellectuals and members of the broader community. Belpré resigned her position in 1945 to focus on her writing and resumed her NYPL employment in 1960 before retiring in 1968. Her many books include Pérez y Martina (1932), the first US-published Puerto Rican folktale, The Tiger and the Rabbit, Juan Bobo & the Queen’s Necklace, Santiago, Oté, Dance of the Animals, Once in Puerto Rico, and The Rainbow-Colored Horse.

Her cultural works and accomplishments were important in creating a NYC Puerto Rican literary legacy. Pura Belpré died on July 1, 1982 at the age of 79. Since 1996, the American Library Association annually gives the Pura Belpré Award to a writer who celebrates children’s Latinx culture.