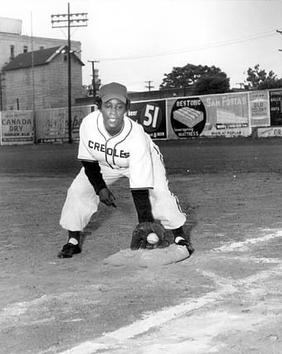 Marcenia Lyle “Toni” Stone Alberga was the first of three African American women to play professionally in the Negro Leagues.

Stone was born on July 17, 1921, in Bluefield, West Virginia. Her parents, Willa and Boykin Stone, moved the family to St. Paul, Minnesota, when she was ten years old. In her youth, she developed a love of sports, including track and field, ice skating, and baseball. By the time she was ten years old, her parents invited a local Catholic priest over to talk her out of playing baseball, but instead the priest invited her to play with his team, the St. Peter Clavers, in the Catholic Midget League. Stone attended Roosevelt High School in Minneapolis but dropped out of school by the age of fifteen. She first played second base with the Twin Cities Colored Giants semipro team, a local barnstorming club which traveled around the Midwest and Canada.

During the 1936–1937 season, Stone worked out with the St. Paul Saints of the American Baseball Association. She moved to the California Bay Area to care for her sister Bunny and lived there from 1937 to 1946. She worked at a shipyard in the daytime as a forklift Operator, and at night, she worked at a cafeteria. While in San Francisco, Stone played for the Wall Post American Legion Team and the San Francisco Sea Lions in the West Coast Negro Baseball League, making about $200 to $300 a month. In 1949 she played a season with the New Orleans Creoles but left to play with the Black Pelicans, another Louisiana team.

Stone married Aurelious Pescia Alberga in 1950, a man forty years her senior who did not approve of her playing baseball. Nonetheless in 1953, Stone was signed with the Indianapolis Clowns, a team with a reputation like the Harlem Globetrotters. She dropped ten years off of her birthday and claimed she had a master’s degree to add to her appeal. Stone appeared in fifty games in her first season but was traded off-season to the Kansas City Monarchs.

Stone usually dressed in the umpire’s room and would come out by the middle innings, so she had a chance to shower and change before the rest of the team returned. After the 1953–1954 season with the Monarchs, Stone retired from professional baseball, finishing her career with a batting average of .243. She cared for her husband until his death in 1987 at the age of one hundred and three.