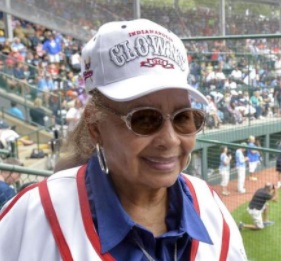 Johnson was born Mamie Belton on September 27, 1935, in Ridgeway, South Carolina, to Gentry Harrison and Della Belton Havelow. While her mother worked in Washington, DC, Belton lived with her grandmother, Cendonia Belton, in South Carolina and attended Thorntree School. Belton’s love of baseball began when she was six years old. Along with her uncle, she made bats out of tree limbs, bases out of pie plates, and balls from rocks wrapped in tape. In 1945 after her grandmother had a stroke, Johnson moved in with family in New Jersey.

Belton tried playing softball with the girls but was used to playing hardball with the boys. She tried out for all all-white boys’ baseball team organized by the Long Branch Police Athletic League (PAL) and became the only girl and only African American on the team. Her skill helped the team win the next two division championships.

By 1947, Belton moved to Washington, DC with her mother Della Belton, who had become a dietitian at Freedman’s Hospital (Howard University Hospital). Johnson graduated from Long Branch High in 1949. She attended a National League tryout in Alexandria, Virginia, in the early 1950s, but she was not allowed to try out.

In 1952 Belton met and married Charles Johnson, and the couple had one son, Charles Guy Johnson Jr. By 1953, Johnson was working in an ice cream shop and playing baseball on the weekends. She played with a few local minor league teams such as the Alexandria All Stars and St. Cyprians. She was signed by the Indianapolis Clowns as their starting pitcher in 1953 to replace their second baseman, Hank Aaron, who had gone into newly integrated Major League Baseball. Johnson would pitch for six, seven, or nine innings, striking out her fair share of players. Belton stood just five feet three and was once mocked by a rival player for being no bigger than a peanut, and the nickname stuck with her throughout her career.

Johnson hit between .252 and .284 in each season she played. When she wasn’t pitching, she would play second base. Her batting average ranged from .262 to .284. Johnson won thirty-three games and lost only eight games during her career where she earned about $400 to $700 a month. Satchel Paige helped Johnson perfect her curve ball before their opposing teams went on to play each other. That episode is depicted in a scene from the 1992 movie, A League of Their Own. Johnson is the subject of the 2002 book, A Strong Right Arm.

Mamie Lee Johnson retired from baseball in 1955, and after training, she had a second career as a Licensed Practical Nurse. She worked at Sibley Hospital in Washington, DC for 40 years before retiring in 1995.

Johnson’s list of achievements includes receiving the Mary McLeod Bethune Continuing the Legacy Award and being honored as a Female Baseball Legend by President Bill Clinton in 1996. She has made appearances with fellow former Negro League players Bob Scott, Jim Robinson, and Lionel Evelyn, and in 2005 she joined Washington DC Mayor Anthony Williams at the opening of a Washington Nationals game.

Johnson ran a Negro League Baseball shop in Bowie, Maryland, with her son until its closing. She passed away on December 18, 2017 in Washington, DC, reportedly of a heart ailment.