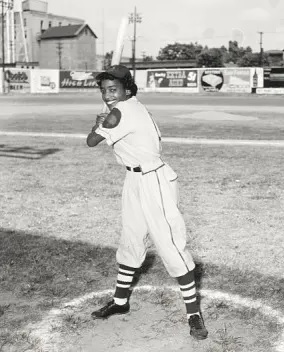 Constance “Connie” Enola Morgan was one of the first three African American women to play in the Negro Leagues. Morgan was born in Philadelphia, Pennsylvania, on October 17, 1935. Her mother, Vivian Beverly, stayed at home with her five children while her father, Howard Morgan, worked as a window cleaner. She first attended Landreth Elementary School and graduated from John Bartram High School in Philadelphia in 1952 before enrolling in the William Penn Business School.

Morgan first played baseball in high school as a catcher with the North Philadelphia Honey Drippers, an African American women’s baseball team for a total of five seasons. She played several positions, with a final batting average of .338. While in business school, Morgan read an article in the local newspaper about African American women playing for the Indianapolis Clowns, a Negro League team. She wrote the manager, Syd Pollack, and asked for a tryout. She was invited to come to a game in 1954 when the Clowns were in an exhibition game with the Baltimore Orioles. Pollack was so impressed with Morgan’s skills that he signed her to a two-year contract, replacing Toni Stone at second base.

Morgan stood at five feet four and weighed just one hundred and thirty-five pounds. She was called lightning fast when she had an opportunity to run the bases. She hit around .300, batting third in the lineup, and played in a total of forty-nine games. In addition to playing baseball, Morgan also played basketball for a well-known city wide team, The Rockettes at the Christian Street YMCA in South Philadelphia. She was mentioned several times in her hometown newspaper, The Philadelphia Tribune, as well as other African American and white newspapers where she often received special attention during her single year in the Negro Leagues.

A highlight of Morgan’s career was returning to Philadelphia for her first game in the city as a player for the Indianapolis Clowns at Connie Mack Stadium (formerly Shibe Park). The Clowns swept the doubleheader against the Philadelphia Monarchs. The stadium, located at north 21st Street and West Lehigh Avenue, was home to the Major League teams, the Philadelphia Athletics of the American League and Philadelphia Phillies of the National League. The stadium was demolished in 1976.

After just one season with the Indianapolis Clowns, Morgan retired from professional baseball and returned to her classes at William Penn Business School, graduating in late 1955. Soon afterward, she was hired as a typist at Moss and Demany Furriers in the city. She later worked for the American Federation of Labor and Congress of Industrial Organizations (AFL-CIO), the largest federation of unions in the United States until she retired in 1974. Morgan was inducted into the Pennsylvania Sports Hall of Fame in 1995. She died on October 14, 1993, in her hometown, Philadelphia, just three days before her fifty-eighth birthday.