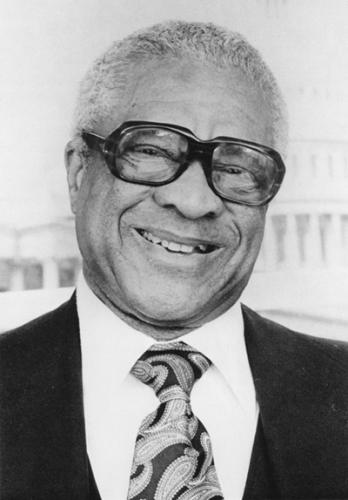 Born in Huntsville, Alabama, on the 6th of August, 1912, Illinois Congressman Bennett McVey Stewart was the son of Bennett Stewart and Cathleen Jones. He attended local public schools in Huntsville and Birmingham before entering Miles College in Birmingham. There he earned a Bachelor of Arts degree in 1936. His first job after graduation was assistant principal of Birmingham’s Irondale High School, from 1936 until 1938. Next he took a job as associate professor of sociology at Miles College in Birmingham. That year he married Pattye Crittenden, with whom he had three children.

Stewart left the teaching profession in 1940 to work for Atlanta Life Insurance Company were he eventually became an executive.  He moved to Chicago in 1950 to set up the Company’s new office and remained working there for the next eight years.

Stewart’s political career began in 1971 when he was elected to the Chicago City Council as an alderman from the 21st Ward. The next year he also served as the Democratic Committeeman. He held both of these positions until 1978. Following the death of Representative Ralph Metcalfe, Stewart was chosen as his party’s candidate to fill Illinois’s First District Congressional Seat.  Although he was supported by all ten of the Democratic ward committeemen of the First Congressional District, Stewart’s selection was considered controversial because of his loyalty to Chicago Mayor Richard Daley who was perceived by many African Americans in his district as racist and repressive of civil liberties.

In spite of this opposition, Stewart won the nomination and the general election in November.  He was sworn in on January 3rd, 1979. He served on the House Appropriations Committee, helping pass legislation that benefited his district, including the financial bailout of the Chrysler Motor Corporation, which employed over 1,500 of his constituents.

Stewart served only one term, but continued his career in politics as an interim-director of the Chicago Department of inter-Governmental Affairs.  He was appointed to the position by Chicago Mayor Jane Byrne who succeeded Mayor Daley.

Bennett McVey Stewart, a member of Alpha Phi Alpha Fraternity, died in Chicago on April 29th, 1988.  He was 75.