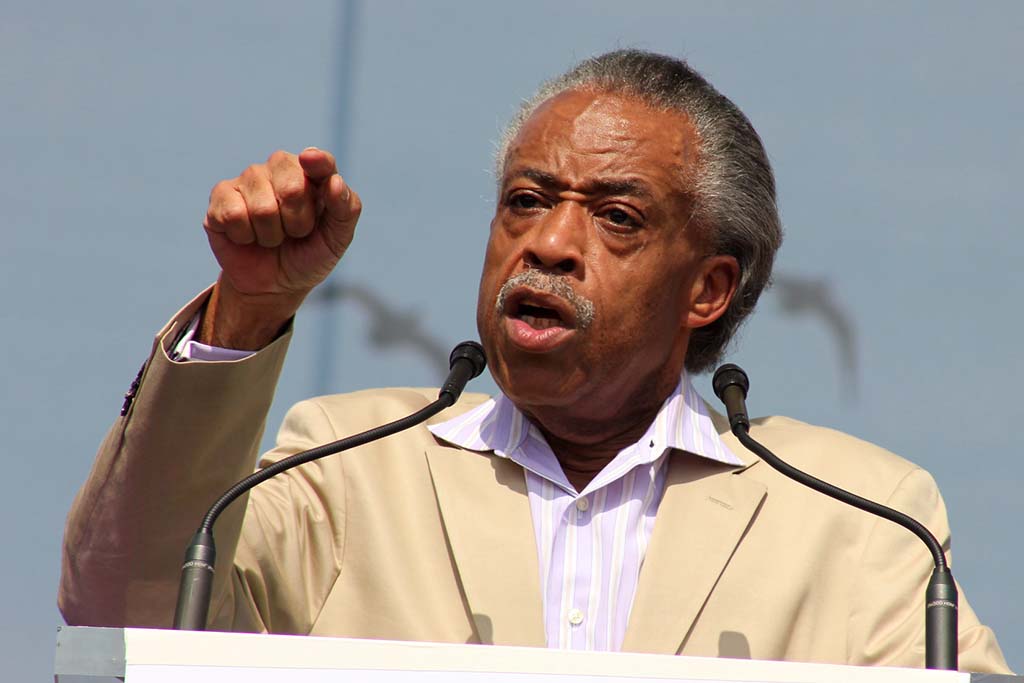 Born in Brooklyn, New York on October 3, 1954, Alfred Charles Sharpton, Jr., is an American Baptist minister and political, social, and human rights advocate.  Known as “the Wonder Boy” as a youth, he was licensed and ordained as a Pentecostal minister and toured with the gospel singer Mahalia Jackson.  In the late 1980’s, Sharpton became a Baptist minister.

Often criticized and praised for his tireless activism, Sharpton’s political career began in 1969, when Reverend Jessie Jackson chose him as youth director for Operation Breadbasket. While serving as one of the tour managers for the soul singer James Brown, Sharpton raised on the road a myriad of issues ranging from police brutality to economic empowerment to stopping the United States Navy bombing on the Puerto Rican island of Vieques to supporting Gay Rights. He organized the National Youth Movement (NYM) in 1971 to aid impoverished youth, and the National Action Network in 1991 to increase voter registration, poverty services and support entrepreneurship. The NYM faced charges of fraud and Sharpton himself was accused of being a Federal Bureau of Investigations informant.

Al Shapton gained national attention in 1985 with his public denouncement of Bernard Goetz, a white man that shot four black men on the New York subway. Among his most noted campaigns, protested the racially motivated death of Yusef Hawkins in Bensonhurst, Brooklyn in 1989; the death of Amadou Diallo at the hand of the New York Police Department in 1999; and the alleged abduction and rape of Tawanna Brawley by three police officers. Though a grand jury dismissed Brawley’s claims, Sharpton continues to maintain the officers’ guilt.

Although never elected, Sharpton ran for office on numerous occasions, including three bids for a United States Senate from New York (1988, 1992, and 1994); and a bid for Mayor of New York City in 1997.  Sharpton also made an unsuccessful bid for President of the United States in 2004 when he entered the Democratic Primary.

Most recently in 2007 Sharpton protested the disparities in the American justice system for African Americans in the Jena Six case, where six black youth were arrested after a school yard fight with a white classmate after a number of racially motivated incidences and charged with attempted murder.  He challenged the prevalence of misogyny in American culture and Hip Hop culture in particular.  He also led the 2007 campaign again radio personality Don Imus following his depiction of the National Collegiate Athletic Association (NCAA) runner-up team from Rutgers University as “nappy headed ho’s.” While some view Sharpton as a demagogue, few figures in his era have so consistently pointed to the radical divide between the rhetoric and reality of quality in the United States.