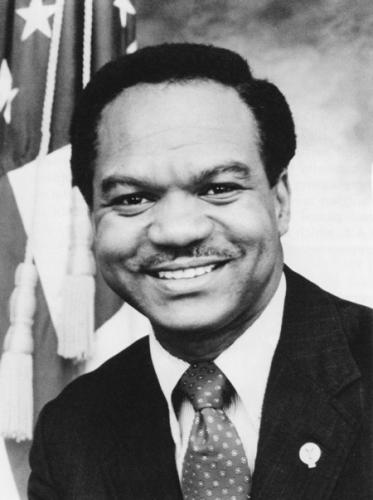 Reverend Walter E. Fauntroy, pastor, Congressional representative, and civil rights activist, was born in Washington, D.C., on February, 6, 1933. The son of Ethel Vines Fauntroy and William Thomas Fauntroy, who worked in the U.S. Patent Office, Walter Fauntroy graduated from Dunbar High School in 1952. He earned a B.A. degree in History from Virginia Union University in 1955 and then a Bachelor of Divinity degree from Yale University Divinity School in 1958. While at Yale, Fauntroy married Dorothy Simms on August 3, 1957. They have two children, Marvin Keith and Melissa Alice. Also during this time, Fauntroy met fellow theological students Martin Luther King Jr. and Wyatt Tee Walker.

In 1959, Fauntroy became pastor of the New Bethel Baptist Church in Washington, D.C., succeeding his mentor, Reverend Charles David Foster, who had just passed away. The following year Martin Luther King and Wyatt Tee Walker asked him to become the District of Columbia (DC) branch director of the Southern Christian Leadership Conference (SCLC).  Fauntroy accepted and became the civil rights organization’s lobbyist in Congress until 1970.

In this capacity, Fauntroy lobbied for the passage of the Civil Rights Act of 1964, and the Voting Rights Act of 1965. Also during this time, Fauntroy coordinated several historic marches for civil rights, including the 1963 March on Washington for Jobs and Freedom, the Selma to Montgomery Voting Rights March in 1965, and the Meredith Mississippi Freedom March in 1966. During this same year, President Lyndon B. Johnson appointed Fauntroy Vice Chairman of the “White House Conference to Fulfill These Rights,” an organization that explained civil rights goals to Congress and the public.  In 1967 Fauntroy was appointed to his first political office when President Johnson named him Vice-Chairman of the D.C. City Council.  Fauntroy held that post until 1969.

In 1971, Fauntroy was elected to serve as delegate of the District of Columbia and a member of the United States House of Representatives. Upon assuming this position, he became the first person in one hundred years to represent the District in Congress. In this position, Fauntroy proposed two pieces of legislation important to his constituents: the Washington D.C. Home Rule Act of 1975, and the Washington D.C. Voting Rights Amendment of 1978. The amendment did not become law because too few states ratified it in the seven year time frame required by the U.S. Constitution.

While in Congress, Fauntroy served as chairman of the Subcommittee on International Development, Finance, Trade, and Monetary Policy, which was a part of the House Banking, Finance, and Urban Affairs Committee. He was also a founding member of the Congressional Black Caucus in 1971 and served as its chair from 1981 to 1983.

Congressman Fauntroy resigned his seat in 1990 in an unsuccessful bid to become Mayor of Washington, D.C.  After losing the race to Sharon Pratt Dixon Kelly, he created Walter E. Fauntroy & Associates, a consulting firm that specializes in investments in Africa and within African American business communities. He continued to serve as pastor at New Bethel Baptist Church in Washington, D.C.