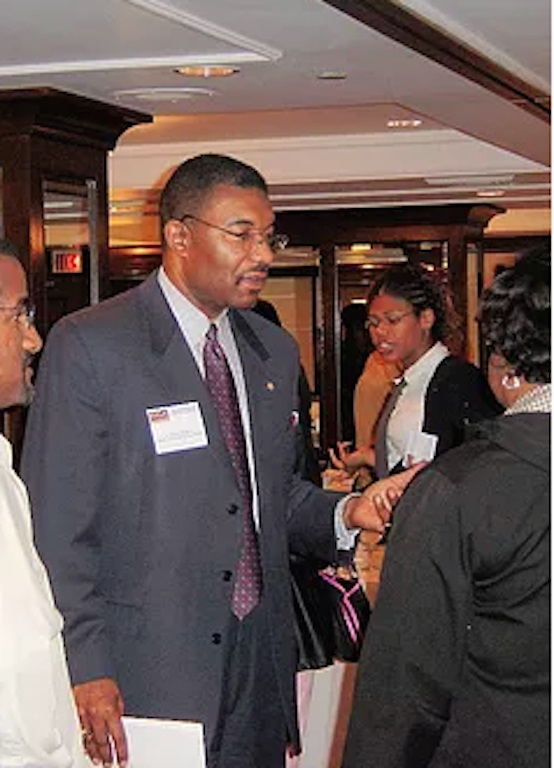 Robert Louis Shepard, PhD. is an author and chemist.  He is best known for opening doors of opportunity for faculty and students in science-related fields at Historically Black Colleges and Universities (HBCUs). Beginning in 1983 he became an advocate for inclusion of HBCUs in the federal government’s university-government partnership.

Shepard was born December 25, 1947 in Raleigh, North Carolina to Verna and Louis Shepard. He and his family, including seven siblings, were raised in Garner, North Carolina. During his years at Garner Consolidated High School, Shepard excelled in academics and sports. In 1965, he graduated salutatorian of his high school class and was awarded an academic scholarship to Saint Augustine’s University. He received a bachelor of science degree in chemistry from that institution in 1969. He was awarded a NASA fellowship from Howard University to pursue a PhD in chemistry. In 1971 Shepard earned his master’s degree in physical organic chemistry and two years later his doctorate in the same field from Howard University.

Shepard joined the U.S. Nuclear Regulatory Commission (NRC) in 1975, becoming the first black scientist with a PhD in the Division of Nuclear Materials Safety and Safeguards. During the same year, he published a paper, Bias Corrections in the Measurement of Nuclear Materials, that led to his being promoted to the NRC Research Office where he led safeguards research efforts. While there Shepard became a member of peer review panels for federal agencies. This position entailed evaluating university proposals submitted in response to federal research opportunities. He noted that proposals by HBCUs to gain federal funding were noticeably absent.

In 1983, he founded INFRASURFACE, INC., a non-profit consulting firm that provided technical assistance to HBCUs and to indigenous African organizations working to improve technical capacity on that continent. In 1984 Shepard joined the chemistry department at Howard as a visiting scientist through the federal government’s Intergovernmental Personnel Assistant Program. He took this position partly to test his model for improving research at HBCUs.

Four years later Shepard created the first financial assistance program at the NRC to support research at HBCUs. He left his position at the NRC in 1990 to establish Science and Engineering Alliance, INC. (SEA), a non-profit education research consortium of four HBCUs: Alabama A&M University; Jackson State University; Prairie View A&M University; and Southern University. The goal of SEA was to create access for HBCUs and other minority-serving institutions in the federal research enterprise.

Through SEA, Shepard formed the National Ecological Observatory Network (NEON) Satellite Site program for inclusion of HBCUs in the National Science Foundation’s (NSF) NEON big science initiative. In 2013, he formed The Shepard Institute (TSI), LLC with the goal of continuing advocacy work on behalf of HBCUs. One year later Shepard stepped down from SEA leadership but not before helping the four HBCUs gain over $1 billion in federal support over a 24-year span. Through his efforts thousands of faculty and students at HBCU’s received crucial support as they pursued their scientific research.

In 1969 Shepard married Alzonia Wiggins of Zebulon, North Carolina.  The couple have three children, Shawn E. Shepard, Dr. Robin Shepard-Broughton, and Pamela Shepard-Hill. Shepard has been the recipient of numerous awards including most notably Emerald Honors Educational Leadership Award in 2006 from Science Spectrum Magazine. In addition to helping HBCUs obtain federal funding for science programs, he has also supported science and technical education in Washington, D.C. area public schools. Shepard, a member of Alpha Phi Alpha fraternity, is also the author of Fulfilling My Destiny, Step by Step: An Autobiography (2013) and companion workbook Fulfilling My Destiny, Step by Step: A Self-Help Guide (2017). His October 2016 TED talk at Howard University is linked here.