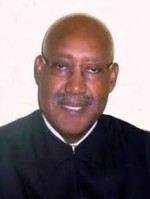 Louis Sturns was the first African American to serve on the Texas Court of Criminal Appeals, the state’s highest criminal court. Sturns was born to Robert L. Sterns and Emma Sturns on August 6, 1949 in Henderson, Texas, located in Rusk County. He was raised in Rusk County with three older brothers and graduated from Rusk County High School 1966.

Sturns got his undergraduates degree in political science with a minor in sociology from Wichita State University in Wichita, Kansas in 1971. He enrolled in the Reserve Officer Training Corps (ROTC) to help pay for college but realized that being in the Army isolated him from participating in the nationwide protests against the Vietnam War that were occurring at the time. Sturns avoided the draft by deferring his enrollment and was able to attend Kansas University Law School. He earned his law degree in 1973.

While waiting for his bar results, Sturns, one of Tarrant County’s (Fort Worth) few black attorneys, began working for Clifford Davis, the most prominent African American attorney in Tarrant County. After passing the bar, Sturns worked as a prosecutor, defense attorney, and legal adviser at Fort Hood, Texas, the nation’s largest military base. Although Sturns was in the U.S.  United States Army, he served as a Judge Advocate General Corps for soldiers dealing with civil rights cases. In 1976, Sturns returned to Clifford Davis’s Fort Worth firm to work on legal cases ranging from criminal lawsuits to wills.

In 1990 Louis Sturns was the first African American to serve on the Texas Criminal Court of Appeals. He was appointed by Texas Governor William Clements, and he served on the court until 1991.

Louis Sturns has and continues to serve both the Texas legal community and the general community of Fort Worth. Judge Sturns is a former member of the Texas Wesleyan School of Law advisory board and the founding fellow and a former director of the Tarrant County Bar Foundation. He is a former member of Texas Juvenile Justice Advisory Board and Texas Ethics Commission as well as former chairman of the Tarrant County Silver Gavel Committee. He is also on the board of the Fort Worth Metropolitan Black Chamber of Commerce and currently a member of the Texas Public Safety Commission.

Judge Sturns is married to Marilyn Sturns and the couple have four children.