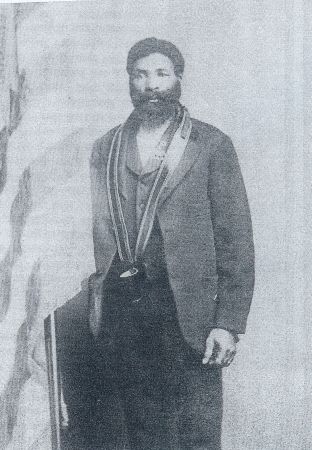 In the following article Sharon McGriff-Payne, a newspaper reporter and independent historian, describes her search for the history of John Grider, an early black pioneer and member of the Bear Flag Party which declared California’s independence from Mexico on June 14, 1846.  McGriff-Payne, like Girder was a longtime resident of Vallejo, California, a small city on San Pablo Bay about 35 miles northeast of San Francisco.  Yet for most of her life she had never heard of this pioneer.  She describes below her search for the history John Grider.

On December 23, 1924, John Grider, one of the last known survivors of California’s Bear Flag Party, died in virtual obscurity in a Solano County, California hospital.

Grider, who was one of at least seven African Americans present at this formative event that helped shape California statehood, died as he had lived – quietly and without fanfare.  He was 98 years old.

Until the publication of Delilah L. Beasley’s groundbreaking book, The Negro Trail Blazers of California, in 1919, few had known of Grider’s role in early California history.  It was from Beasley’s 1914 interview with Grider that she featured in her book, that many Americans first learned  that African Americans were present at the Bear Flag Revolt and the subsequent events leading up to the establishment of the nation’s  31st state.  Yet, 96 years later, despite my being a lifelong resident of Vallejo where Grider also spent most of his life, I knew nothing about him.

In 2006 with Delilah L. Beasley’s work serving as my guiding inspiration, I decided to follow up on her early exploration and interview with John Grider. Beasley’s introduction to Grider came in the fall of 1914 when she learned that the African American pioneer was one of several men and women honored in a huge September 14  Admission Day parade in Vallejo.  More than 40,000 people from throughout the state converged on Vallejo to celebrate the 64th anniversary of California’s statehood.  During the event sponsored by the Sons and Daughters of the Golden West, Grider was feted as one of the last remaining survivors of the Bear Flag Party.

Beasley, who was well into the research of her book of California’s black pioneers, jumped at the opportunity to document Grider’s role in the momentous events of June 14, 1846.  When Beasley learned of Grider, she “hastened” to Vallejo to interview the 88 year old pioneer.   Despite his advanced years, Beasley said Grider’s memories of the events surrounding the 1846 revolt “were as fresh in his mind as if of recent date.”

Grider recounted those events and his role in them.  He was in the company of a small band of Americans who, on June 14, 1846 declared war on the Mexican government and arrested General Mariano Guadalupe Vallejo who was the leading Mexican military official in the area.   These rebellious Americans listed their grievances against the central government in Mexico City (which was actually farther from them than Washington, D.C.).   They then raised the Bear Flag and declared independence for California.

Grider told Beasley there were other African American men who were with him at the time of the revolt including James Duff, Jacob Dodson, Charles Gains, Billy Gaston, Joe McAfee and “Ben,” a bodyguard to U.S. Army Lieutenant Archibald Gillespie.   Beasley also learned that Grider found the paint for the Bear Flag and served as a flag bearer on the day of the revolt.

Relying on Beasley’s account, I began my own search for John Grider some 96 years later.  I wanted to know more about this unsung hero who was part of a movement that would shape the history of California and the West.   Beasley’s research had established that Grider was still living in Vallejo in 1914.  Using that information as my guide I started the search for Grider’s whereabouts in the city that was my home.   I would soon learn that Grider left an indelible footprint on Vallejo, revealing a long and stable life rich in historical significance.

Through census records, legal documents and a faded photograph, I soon pieced together the life of this former Tennessee slave who came to California in the early 1840s in bondage to a man named George H. Wyatt.  Within days of my research journey to discover Grider I found his name listed in a late 1860s Vallejo city directory.  The directory noted that Grider was a “hostler” – a person who works with horses.  Further research revealed that Grider worked at several downtowns Vallejo livery stables.  This confirmed Beasley’s report that Grider was a horse trainer and self-taught veterinary surgeon.  It was those skills that no doubt made Grider an invaluable asset in the Vallejo community.

During his life, Grider was known as a formidable horseman.  F. W. Derrick, himself a former Pony Express rider and expert horseman, said his friend Grider was one of the best rough riders he had ever known.  Grider was known for skillful horse shows given each 4th of July in Vallejo’s downtown and was a familiar figure to area residents as he was often seen driving his six-horse wagon team along the city’s main downtown.  In addition to working at area livery stables, Grider also was a teamster and ranch hand.

A search of area historical archives reveal a lengthy obituary following Grider’s death in December 1924 in the Solano Republican newspaper.  This death notice entitled “An Interesting Sketch of a Negro Pioneer,” provided rich detail into Grider’s remarkable life.  Grider, according to the obituary, came to California through Mexico.  It’s almost certain, according to the author of the obituary, that Grider came to California in a party that followed Captain John Charles Fremont, the Army officer who was sent west to map out the western territory on behalf of the United States government.

In 1850, Grider purchased his and his mother Caroline’s freedom following a stint in the gold mines of Calaveras County.  That same year, Grider settled in Vallejo and remained in the city for more than six decades.  He left Vallejo around 1915 only because he was elderly and no longer able to work.  His remaining years were spent in a Fairfield County hospital where he died.

Further research revealed that Grider signed up for the mandatory Union Draft of 1863. Those records showed that he stood at 5’- 9” tall.  There is, however, no record of his being drafted and serving in the Union Army.  He did register to vote in 1870 after the 15th Amendment to the U.S. Constitution was ratified.  That amendment extended voting rights to black males throughout the nation.  He voted regularly until the early 20th Century.

During a research trip to the Vallejo Naval and Historical Museum in Vallejo, California, I first learned of Grider’s place in California history.  His name and photograph appeared among the Vallejo Society of Pioneers.  Membership in that organization required that one be present in the state prior to 1849.   Although there were dozens of other African Americans in California before 1849, Grider is one of the few to be awarded “pioneer” status by a city or town chapter of the Society of Pioneers.

My quest to find out more about John Grider led me to discover other early African Americans in the North Bay counties of Solano, Napa and Sonoma. I also learned that slavery existed prior to 1860 even in California’s North Bay.  With this and other information, I soon realized that  California’s “free state” status in the 1850s was a myth.  As early as 1846, when California was still under Mexican control, 33 men, women and children were sold for more than $9,000 in Napa County.  A manumission paper I found at the Solano County Archives revealed the emancipation of Adam Willis, a 29-year-old former Missourian who was granted his freedom by a Benicia Court in September 1855.  I also learned that the California Fugitive Slave Act was passed in Vallejo when it served as the state capital from 1852 to 1853.

My search also led me to early African American businessmen and women, black farmers and property owners.  I learned of the struggle for public education of black children and early black schools in Vallejo, Napa and Petaluma.  I also learned that 19th Century local residents engaged in their own civil rights campaigns when they pushed for equal rights in the first two decades of California state history.  Vallejo residents and others from surrounding towns participated in the early “colored” conventions held in Sacramento and San Francisco during the 1850s and 1860s.  These conventions foreshadowed 20th Century organizations such as the National Association for the Advancement of Colored People (NAACP) and the National Urban League in their quest for full citizenship for African Americans.

My initial research resulted in John Grider’s Century – African Americans in Solano, Napa and Sonoma Counties from 1845 to 1925, which is the first history of this black Vallejo pioneer. Yet I now realize that I have only uncovered a small portion of a much large history of African Americans in early California.  So many questions remain.  What happened to the other black men present at the Bear Flag Revolt?  How did they and their descendants make lives for themselves in a region with relatively few black people?  What legacy did they leave for contemporary black Californians and for all Californians?  The search continues.