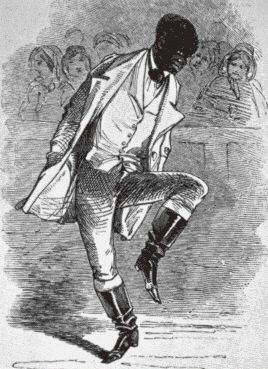 William Henry Lane is credited as one of the most influential figures in the creation of American tap dance. Lane developed a unique style of using his body as a musical instrument, blending African-derived syncopated rhythms with movements of the Irish jig and reel. Lane’s melding of these vernacular dance forms is recognizable today as the foundations of the ever-evolving style of American tap dance.

Free-born in Providence, Rhode Island around 1825, Lane began learning the Irish jig and reel from “Uncle” Jim Lowe, a dance hall and saloon performer in New York City, New York. By the age of ten, Lane was performing in Paradise Square in the Five Points District of New York, where a high concentration of African American and Irish populations lived alongside each other. The vernacular dance forms of these two ethnic groups intermingled, providing Lane access to the different rhythmic and movement foundations that facilitated the development of his style of dance.

Lane’s original use of different areas of his feet to create rhythms, keep time, and improvise complex, syncopated rhythms was revolutionary for the 1840s. He used his heels to create the deeper tones of the bass drum, and the balls of his feet to layer softer, higher sounds. Keeping with African oral traditions, Lane incorporated singing and laughter into his performances, adding another layer to his rhythmic creations. Through these innovative combinations of rhythm, footwork, improvisation, and vocals, Lane created a blended style of African dance and British Isles folk dance still recognizable in modern times. Students studying tap in the 21st century can attribute the styles they learn to Lane.

Around 1840 Lane was hired by P.T. Barnum to perform at Barnum’s Museum and was billed as “Master Juba, the Dancing Wonder of the Age.” By 1846 Lane was touring New England and Europe with Pell’s Ethiopian Serenaders and received top billing as the only African American among a troupe of white performers who appeared on stage in blackface makeup (burnt cork), the traditional format for minstrel shows at the time.

Records indicate Master Juba lived the intense life of a touring performer, giving shows every night. He also opened a dance school in London. Details of his death are not known, but it is thought Lane died at the age of 27 in London in 1852.