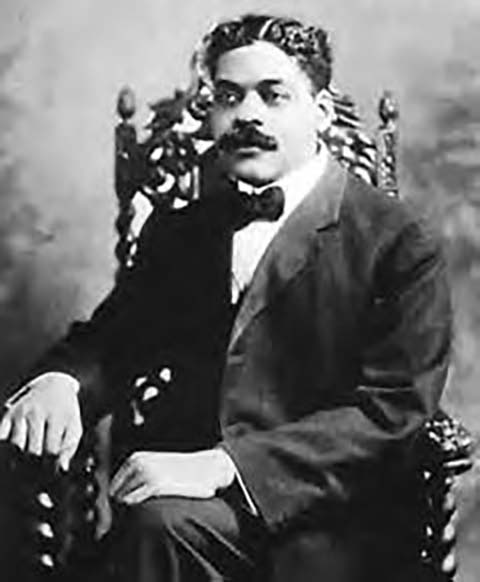 Arturo Alfonso Schomburg, collector, archivist, writer, activist, and important figure of the Harlem Renaissance was born in San Juan, Puerto Rico on January 24, 1874. His mother was a black woman originally from St. Croix, Danish Virgin Islands (now the U.S. Virgin Islands), and his father was a Puerto Rican of German ancestry.

Seventeen-year-old Schomburg migrated to New York City in 1891. Very active in the liberation movements of Puerto Rico and Cuba, he founded, in 1892, Las dos Antillas, a cultural and political group that worked for the islands’ independence from Spain. After the collapse of the Cuban revolutionary struggle, and the cession of Puerto Rico to the United States, Schomburg, disillusioned, turned his attention to the history and culture of Africa and what we know today as the African Diaspora.

In 1911, as its Master, he renamed El Sol de Cuba #38, a lodge of Cuban and Puerto Rican immigrants, as Prince Hall Lodge in honor of the first African American freemason. The same year, he founded, with journalist John Edward Bruce, the Negro Society for Historical Research which gathered African, Caribbean, and African American scholars. In 1922 he was elected president of the American Negro Academy.

Schomburg firmly believed that “The American Negro must remake his past in order to make his future.” The first part of this process was to reclaim history by evidencing Black people’s contributions to history and culture. Working as a mailroom supervisor at a Brooklyn bank, Schomburg spent his free time and resources, and his retirement after 1930, collecting materials on Africa and its Diaspora. He traveled through the United States, Europe, and Latin America, amassing over 10,000 books, manuscripts, sheet music, photographs, newspapers, periodicals, pamphlets, and artwork.

The second phase of Schomburg’s project was to bring this knowledge to the public. He lent numerous items to schools, libraries, and conferences and organized exhibitions. He wrote articles for a diversity of publications: Marcus Garvey’s Negro World; the NAACP’s The Crisis edited by W. E. B. Du Bois; The Messenger, founded by Socialists A. Philip Randolph and Chandler Owen; the organ of the National Urban League, Opportunity; and Harlem’s newspaper, The Amsterdam News.

In 1926 the Carnegie Corporation bought Schomburg’s collection for $10,000 (about $125,000 today) on behalf of The New York Public Library. The collection was added to the Division of Negro Literature, History and Prints of the Harlem branch on 135th Street.

From 1929 to 1932 Schomburg worked as a curator at Fisk University’s library and was instrumental in expanding its collection from 100 to 4,600 items. Back in New York, he was appointed curator of The New York Public Library’s Harlem Division. He held the position until his death on June 10, 1938 in Brooklyn. He was 64. In his honor, the Division was renamed the Schomburg Collection of Negro Literature, History and Prints in 1940. Arturo Schomburg’s enduring legacy was further acknowledged when the Collection became the Schomburg Center for Research in Black Culture of The New York Public Library in 1972. With over 11 million items, it is one of the world’s foremost research centers on Africa and the African Diaspora.