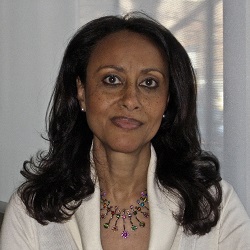 Sylviane A. Diouf is an award-winning historian and a curator. A Visiting Scholar at the Center for the Study of Slavery and Justice at Brown University, she is the author of  ten books, notably, Slavery’s Exiles: The Story of the American Maroons (NYU Press, 2014); Servants of Allah: African Muslims Enslaved in the Americas (NYU Press, 1998 & 2013); and Dreams of Africa in Alabama: The Slave Ship Clotilda and the Story of the Last Africans Brought to America (Oxford University Press, 2007), which received the Wesley-Logan Prize of the American Historical Association, the Sulzby Award of the Alabama Historical Association and was a finalist for the Hurston/Wright Legacy Award. She edited books on African resistance to the slave trade, Black migrations, and Black Power, and has curated ten exhibitions. Dr. Diouf was the 2015 keynote speaker addressing the United Nations General Assembly on the International Day of Remembrance of the Victims of Slavery and the Transatlantic Slave Trade. She is a recipient of the Rosa Parks Award, the Dr. Betty Shabazz Achievement Award, and the Pen and Brush Achievement Award.