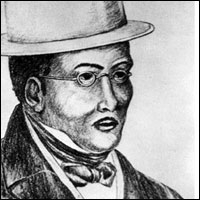 David Ruggles, abolitionist, businessman, journalist and hydrotherapist, was born in 1810 in Norwich, Connecticut. He attended the Sabbath School for the poor which admitted people of color starting in 1815. In 1827 he left Connecticut for New York City where he operated a grocery store for the next four years.  He then quit the grocery business to open his own bookshop in early 1834.  Ruggles is generally known as the first African American bookseller. While working at the bookstore he extended many publications and prints promoting the abolition of slavery and in opposition to the efforts of the American Colonization Society which promoted black settlement in Liberia.  Ruggles also took on job printing, letterpress work, picture framing, and bookbinding to augment his income.  In September 1835, a white anti-abolitionist mob burned his store.

In 1833 Ruggles began to travel across the Northeast promoting the Emancipator and Journal of Public Morals, an abolitionist weekly. Ruggles, who wrote articles and pamphlets and gave lectures denouncing slavery and Liberian colonization, made him a figure of rising prominence in abolitionist circles in the late 1830s.

Ruggles was also active on the Underground Railroad from 1835 to 1838. In 1835 when the New York Vigilance Committee was organized, Ruggles became the secretary of this rare interracial organization. His work with the committee led to his involvement in numerous court cases where he helped organize the legal defense against fugitive slaves who had fled to the North.  The New York Vigilance Committee with the help of Ruggles intervened in over 300 cases of fugitive slaves in 1836, the first year of its existence. In September 1838 Ruggles took on the case of an escaped Maryland slave, Frederick Washington Bailey.  Later Bailey changed his name to Frederick Douglas.

By 1842 David Ruggles was in such poor health that he was almost completely blind and his physician didn’t think he would live more than a few more weeks. Lydia Maria Child, a prominent white abolitionist, learned about Ruggles’ health and had him brought to Northampton, Massachusetts where the Northampton Association of Education and Industry, composed of abolitionists, accepted him as a member. While there trying to recover he learned about hydrotherapy. After eighteen months of hydrotherapy his health was restored. That recovery convinced others of the effectiveness of hydrotherapy. He was said to have the ability to diagnose ailments by his sense of touch, called “cutaneous electricity.” Ruggles’s first patients included wealthy members of the Northampton Association of Education and Industry, which further enhanced his reputation as a healer.

On January 1, 1846 Ruggles purchased land and a building to conduct his hydropathic treatments.  Ruggles became famous in the field and modestly wealthy, offering a cure for ailments that were claimed by conventional medicine to be incurable.  His most famous patient was the abolitionist William Lloyd Garrison.

Ruggles worked as a hydropathist until a recurrence of an inflamed optic nerve in his left eye in September 1849, placed him in the care of his mother and sister.  Three months later on December 26, 1849, David Ruggles died in Northampton, Massachusetts of a severe case of inflammation of the bowels.