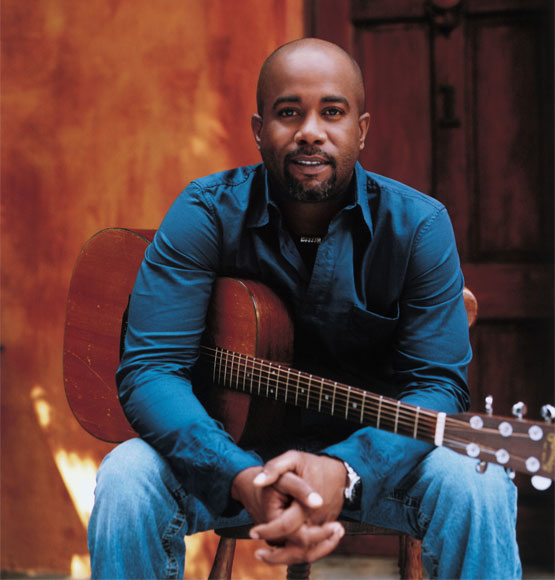 Singer and songwriter Darius Rucker was born on May 13, 1966 to Carolyn Rucker in Charleston, South Carolina. His mother, who worked as a nurse, supported him and his five brothers and sisters because his father, a traveling musician, was rarely able to spent time with the family.  Darius attended Charleston Middleton High School and the University of South Carolina.

While at the University, fellow student Mark Bryan was impressed with Rucker’s voice rolling from the shower.  Guitarist Bryan played with Rucker as the Wolf Brothers; later, with bass player Dean Felber and drummer Jim “Soni” Sonefeld, they formed a group called Hootie and the Blowfish in 1989.  With the wide range of Rucker’s voice, the group played bluegrass, blues, folk, pop, soul, and rock & roll. Their self-financed album Kootchypop (1993) sold 50,000 copies.

The group moved beyond the South Carolina border and played throughout the East coast. Atlantic Records signed the group to a contract, and their album Cracked Rear View reached number one on the Billboard charts and sold more than 16 million copies in 1994.  The group won Grammys for Best New Artist and for Song of the Year by a group for “Let Her Cry.”  Later, the group won the MTV Video Music Award for Best New Artist with the song “Hold My Hand.” They also won People’s Choice Awards for Album of the Year and Best Selling Artist.  Cracked Rear View ranks at number 12 among the best-selling albums in music history.  The group produced five more albums: Fairweather Johnson (1996), which sold five million copies; Musical Chairs (1998), which sold one million copies; Scattered, Smothered and Covered (2000); Hootie & the Blowfish (2003); and The Best of Hootie & The Blowfish (2003).  Later, they released Lucky in 2005.

In 2001, Rucker worked on an album, prospectively titled The Return of Mongo Slade, but had differences with Atlantic Records so it was never released.  He continued working, and produced an R&B/ hip-hop album, Back to Then, in 2002.  Rucker then turned to country music and released a country album in 2008 titled Learn to Live.  His song “Don’t Think I Don’t Think About It” reached number one on the Billboard Country Songs chart—something that had not been done by an African American since Charlie Pride had a hit with “Night Games” 25 years earlier.  Rucker is only the third African American Country And Western Artist to top the country charts (his predecessors were Ray Charles and Charlie Pride).  Rucker had additional hits with “It Won’t Be Like This for Long,” “Alright,” “History in the Making,” “Comeback Song,” and “This.”  In addition to Learn to Live, his other country music albums are Charleston, SC 1966 (2010) and True Believers (2013).

Rucker has a daughter, Caroline Pearl Phillips, who was born in 1995. Rucker married Beth Leonard Rucker in 2000, and they have two children, Daniella Rose (born in 2002), and Jack (born in 2005).  Rucker has received several country music awards, including the Country Music Association’s New Artist of the Year Trophy, which made him the first African American artist to receive this award and the second African American artist to receive any country music award.