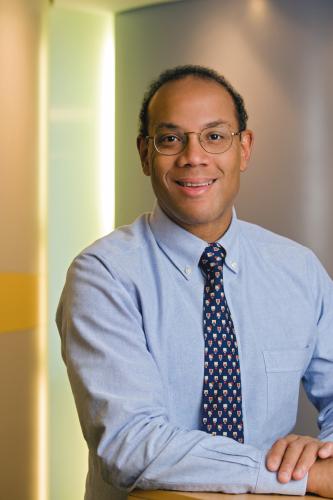 John W. Rogers Jr., business executive, investor, and entrepreneur, was born in Chicago, Illinois on March 31, 1958. Rogers’s mother was Jewel S. Lafontant, a prominent Republican attorney and federal government official and his father was John W. Rogers, a Chicago circuit court judge. Rogers graduated from the University of Chicago Laboratory School in 1976, majoring in economics. He went to Princeton University for his Bachelor of Science and graduated in 1980. Rogers was married in 1988 to Desire Glapion, but the couple later divorced. Before they were divorced they had one daughter, Victoria. Rogers later married Sharon Fairley.

Working in finance was Roger’s lifelong dream. He recalled his father giving him shares of stock on his 12th birthday and from that point he was “hooked” on Wall Street. By his 16th birthday he sold hot dogs, peanuts, and soft drinks at Comiskey Park during White Sox games, and invested all of his earnings in stocks. While in college, Rogers appeared on the television game show Wheel of Fortune, where he won $8,600 in prizes which he immediately invested in the stock market.

After graduating from Princeton, Rogers went to work in Chicago as a stockbroker for William Blair & Company, a banking firm. Rogers was the first person in four years to be hired right out of college and he was the first black professional to work there.

He left William Blair & Company less than three years later to form Ariel Capital Management (1983), a money management firm, after raising $180,000 from family and friends. He named the company Ariel after the almost extinct African and Asian mountain gazelle. His mother’s prominence helped him get recognition and she was a major early investor.

By 2004 Ariel had 73 employees and managed $17 billion in assets for individuals, corporations, university endowments, and some of the nation’s largest public and private pension funds. Also by that date Rogers had created the first two mutual funds in the United States managed by African Americans. His company became successful and somewhat controversial in the 1980s for its “socially conscious” investing strategy. It refused to invest in South Africa, defense contractors, nuclear utilities, cigarette or weapons manufacturers or companies which Ariel felt harmed the environment. As Ariel Capital Management became more successful, Rogers in 1996 founded the Ariel Community Academy that specializes in teaching financial literacy to South Side Chicago children.

In 2008 Rogers was the first African American recipient of the Woodrow Wilson award honoring Princeton alums whose lives embody the ideals expressed in President Wilson’s speech, “Princeton in the Nation’s Service.” John Rogers was an early and active supporter of Barack Obama’s campaigns for Congress, the United States Senate (2004), and the Presidency (2008). Rogers was co-chair of the Illinois Finance Committee for Obama’s presidential campaign 2007-2008. He also served as co-chair of the 2009 Presidential Inauguration Committee.  Rogers is a member of Sigma Pi Phi fraternity.