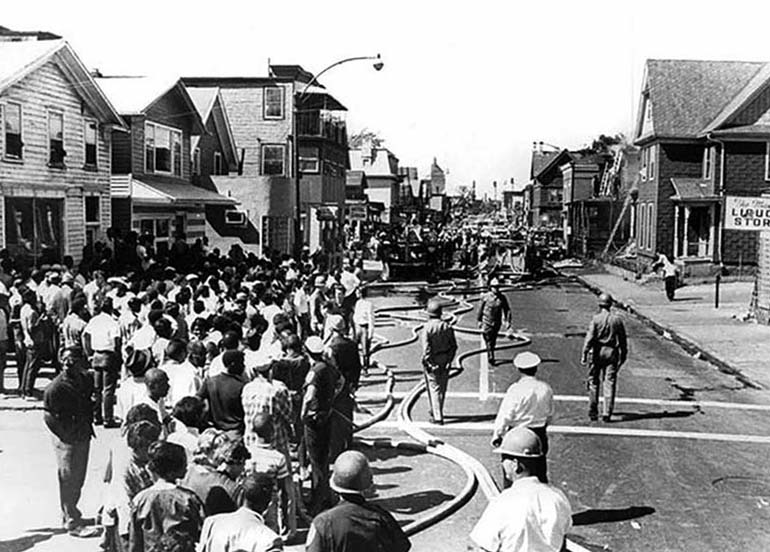 Rochester, New York’s uprising began on July 24, 1964. It occurred less than a week after the Harlem Riot. The Rochester Rebellion came as a surprise to many white residents because of the city’s history of progressive 19th century politics. A large part of that history revolved around the Underground Railroad, and resident abolitionist Fredrick Douglass as well as women’s rights activist Susan B. Anthony.  Both were buried in the city’s Mount Hope cemetery.

Despite that historical legacy, African Americans in mid-20th century Rochester faced housing and employment discrimination. The schools were segregated and police-black community relations were as strained in Rochester as in any major city in the North.

Much of the tension was fueled by the rapid growth of Rochester’s black population which increased from 7,845 in 1950 to around 32,000 in 1964. Most of these newcomers were funneled into dilapidated housing in Upper Falls Rochester, the site where the “riot” began. Black residents of Upper Falls had an unemployment rate six times higher than whites within the same community. Many of the migrants were publicly disparaged and humiliated.  They were often called “bean pickers” by their white neighbors.  Ironically, slum clearance and urban renewal policies designed to get rid of the dilapidated structures that housed these newcomers often ended up eliminating vast areas of housing without replacement dwellings for those forced to move.  All of these factors created the atmosphere for rebellion in 1964.

Rochester’s Rebellion began Friday night, July 24, on Nassau Street in Rochester’s Seventh Ward.  It started at a block party with 200 people present. At 10 p.m., Rochester police arrested Randy Manigault, a 19-year-old African American man, for public intoxication and harassing women at the party. Sine the arrest was made in an atmosphere of tension, additional police were called to the scene.  False rumors of an assault on a pregnant woman by a police officer and a child by a police dog spread through the crowd at the party and soon into the surrounding neighborhood.

By this point Rochester Police Chief William Lombard was on the scene personally directing his officers.  When he ordered the crowd to move, many young blacks began throwing rocks at the police cars, and one police car was overturned. By 11:30 p.m. more than 400 people were battling the police and all available officers went to the streets. At 2:00 a.m., Chief Lombard ordered the police officers to use riot weapons on the crowd.  By 3:30 a.m. the crowd had grown to 2,000 people and looting began on Clinton Avenue, the main thoroughfare through Upper Falls.

By 9:00 a.m. on July 25, the uprising was officially called a “riot” and a state of emergency was declared by New York governor Nelson Rockefeller. While the rioting calmed during the day on Saturday, by 10:00 p.m. Saturday night it resumed. By that point one white man had died.  By Sunday night when the riot ended, approximately 250 stores were looted; five white people died (four men died in a helicopter crash blamed on the riot), and nearly 350 people were injured. The police had arrested more than 900 people in connection with the uprising, the majority were employed black men between 20 and 40 years old with no prior records of violence.  Only 15 percent of those arrested were white.

Through their actions, participants in the Rochester Rebellion debunked several local myths: first, that racial discrimination was mainly a Southern issue; second, that most whites in Rochester were progressive; and finally, that upstate New York African Americans had no issues with discrimination.