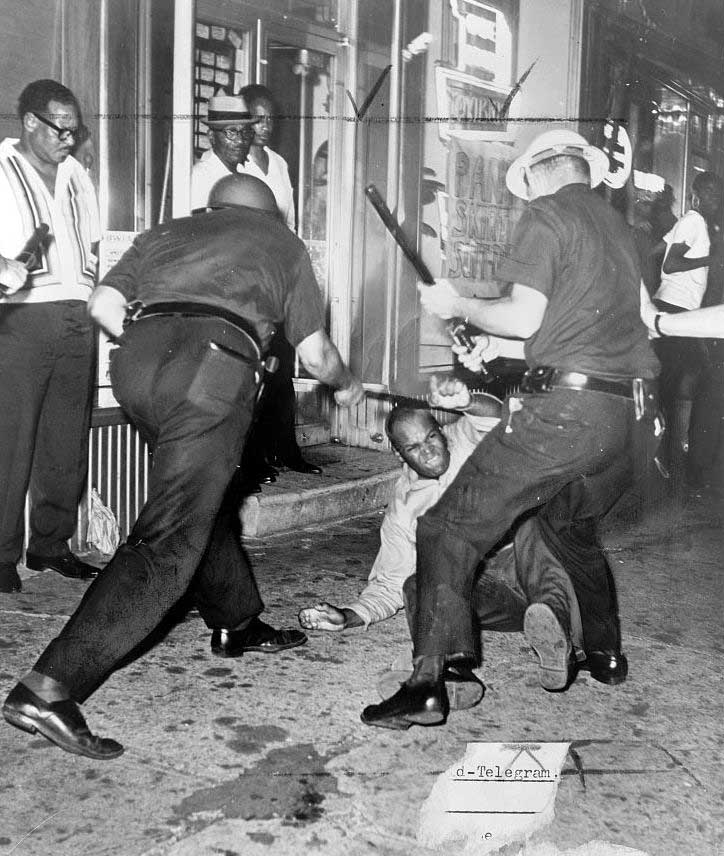 The 1964 Harlem Riot was one of a number of race-based uprisings/ protests that took place in multiple cities across the United States during the 1960s. As elsewhere Harlem blacks reacted to racial discrimination, segregation, police brutality and social injustices that dominated their lives. They resorted to violence to express their disgust with the system.

Ironically the Harlem Riot occurred just two weeks after the 1964 Civil Rights Act was signed into law by President Lyndon Johnson.  The act, which outlawing discrimination based on race, color, sex, religion, and nationality, was the most sweeping measure ever adopted by the nation to guarantee racial justice.  The irony lies in the fact that while the Civil Rights Act made it illegal to discriminate against a U.S. citizen based on race or color, the discriminatory socioeconomic systems and structures long in place in the nation did not change with this new law.

The Harlem uprising began on July 16, 1964 when 15-year-old James Powell was shot and killed by white off-duty police Lieutenant Thomas Gilligan. The Harlem community was infuriated by the murder which it viewed as an unnecessary example of police brutality.  Many Harlemites were convinced that Officer Gilligan, a war veteran and experienced police officer, could have found a way to arrest and subdue Powell without using deadly force.

The first two days following the shooting saw peaceful protesting in Harlem and other areas of New York City, New York. However, on July 18, some of the protesters went to the Harlem Police Station, calling for the resignation or termination of Officer Gilligan. Police officers were on guard outside the building, and as tensions grew, some in the crowd began throwing bricks, bottles, and rocks at the officers who waded into the crowd using their nightsticks.  When word of the confrontation spread rioting ensued first in Harlem and then spread into Bedford-Stuyvesant, the black and Puerto Rican section of Brooklyn.

The race riot in the two boroughs of New York City lasted six days. It included breaking windows, looting, vandalism, and setting a variety of local businesses on fire. When the rebellion ended on July 22, one black resident was killed. There were more than 100 injuries, 450 arrests, and around $1 million in property damage.

The Harlem uprising was the beginning of a series of violent confrontations with police in more than a dozen cities throughout the North including Philadelphia, Pennsylvania; the New Jersey cities of Jersey City, Paterson, and Elizabeth; as well as Chicago (Dixmoor) Illinois, making it the most violent in terms of urban rioting since 1919.  These rebellions as well as civil rights protests mainly in the South, helped designate the summer of 1964 as the Long, Hot Summer.