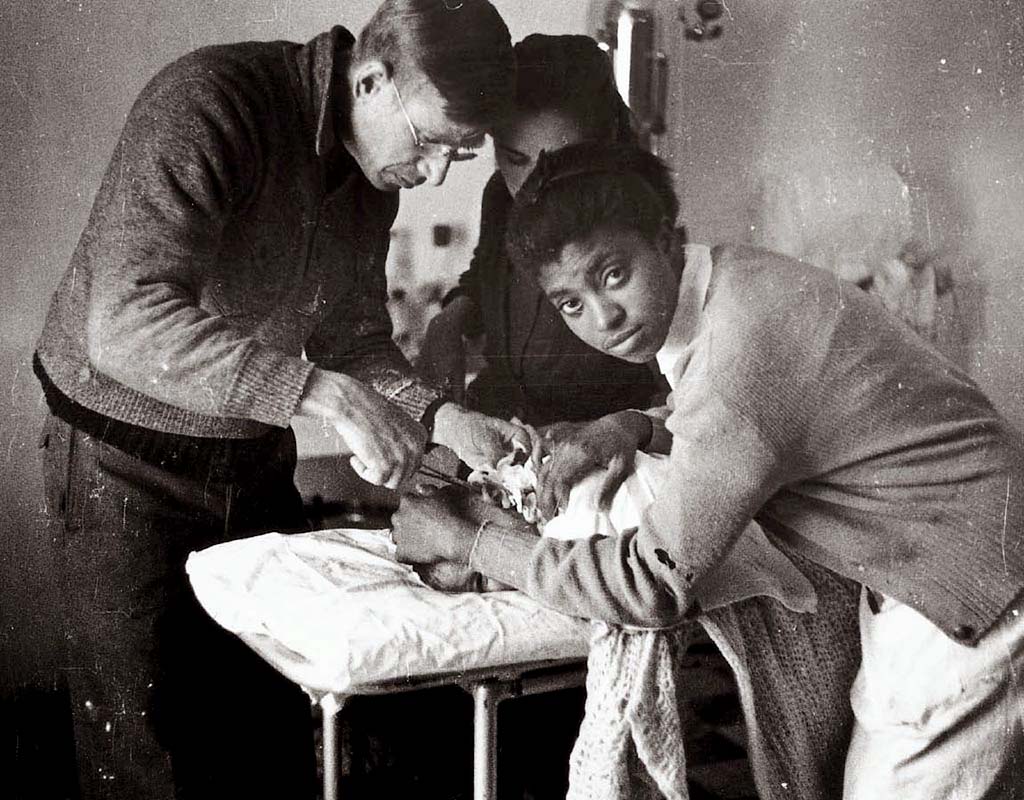 Born 13 July 1913 in Akron, Ohio, Salaria Kee was orphaned in her infancy and raised by family and friends.  After high school, she resolved to become a nurse but was denied by three nursing schools on account of her race.  Leveraging connections to Eleanor Roosevelt, the Harlem Hospital School of Nursing accepted her application and Kee moved to New York City.  Graduating in 1934, she worked as head nurse in the terminal ward of the Sea View Hospital for the treatment of tuberculosis.

When Italy invaded Ethiopia in late 1935, Kee joined a group of Harlem nurses collecting medical supplies for the Ethiopians.  Like many other African American anti-fascists, Kee shifted her support to the Spanish Republic with the rise of Franco.  Her efforts to join the Red Cross in Spain were rejected, again due to her race, but she soon found a place in the American Medical Bureau contingent in support of the International Brigades and departed the United States in March 1937.

A devoted Catholic, she felt it was her duty to go. While assigned to the American hospital at Villa Paz, she met and later married John Patrick O’Reilly, an Irish volunteer in the International Brigades.  As one of a very small number of African American women in Spain on behalf of the Republic, she inspired a highly-promoted pamphlet entitled “A Negro Nurse in Republican Spain” in which several details of her life were altered to support a political agenda.

Returning home late in 1938, she achieved minor celebrity status.  Capitalizing on the pamphlet’s publicity, she embarked on a tour to rally support for the American Medical Bureau and the Spanish Republic, speaking to church groups, schools, NAACP chapters, and even the Girl Scouts.  She faced considerable difficulty securing clearance for her husband to immigrate, but the couple was eventually reunited in 1940.  During World War II, John served in Europe with the U.S. Army as an engineer; although barred for most of the conflict due to her heritage, Salaria eventually served briefly in the U.S. Army’s Nurse Corps.

Salaria passed the rest of her working life in New York City hospitals.  She retired to Akron with her husband and died in 1991.  Likely due to her high visibility in the late 1930s, the Communist Party claimed her as a member, although O’Reilly emphatically denied in interviews even knowing what a communist was when she went to Spain.  Her genuine apolitical commitment to helping others continues to make her a compelling figure even today.