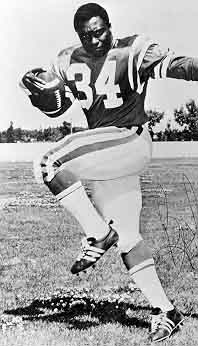 Born on October 2, 1939 in Vicksburg, Mississippi, George Robert Reed is a former American College football and Canadian Football League (CFL) player. Reed is considered one of the premier fullbacks to play in the CFL. Reed played for the Saskatchewan Roughriders for 13 seasons, from 1963 until his retirement in June of 1975.

Reed, whose family moved to Renton, Washington, played football at Washington State University both as fullback and linebacker between 1959 and 1963.  After his graduation in 1963 with a Bachelor of Science Degree in Education, he came to Canada to play professional football with the Saskatchewan Roughriders in Regina, Saskatchewan. As a professional football player George Reed amassed numerous awards such as the Schenley Award for the Most Outstanding Player and set records including most rushing yards (16,116) for all of professional football.  His jersey, # 34, is permanently retired in the Canadian Hall of Fame and Museum in Hamilton, Ontario.

In his 13 seasons with the Roughriders, Reed had established a new standard for running backs in the CFL.  He rushed for 1,000 or more yards in eleven seasons.  He scored 134 touchdowns on the ground and three in the air.  Reed was the League’s Most Valuable Player in 1965.  In 1966 he led the Roughriders to their first Grey Cup (CFL National Championship).  Reed also served two terms as president of the Canadian Football League Association.  At the time of his retirement in 1975 Reed was the still dominant fullback in the CFL.

George Reed became active in the Regina community during his years with the Saskatchewan Roughriders and remained active in the city after his retirement.  In 1974 he established the George Reed Foundation for the Handicapped.  In 1975 he served on the Saskatchewan Special Olympic Committee and the Regina Easter Seals campaign.  Later that year Reed received an Honorary Doctor of Laws Degree from the University of Regina for his outstanding contribution to the advancement of disabled people within society.  He won the 1975 Tom Pate Memorial Trophy given by the Canadian Football League Player’s Association for his outstanding playing ability and community service.  Reed was also made a Member of the Order of Canada in 1978, Canada’s highest civilian honour, and in 1979 was inducted into the Canadian Football Hall of Fame.  George Robert Reed currently lives in Calgary, Alberta, Canada.