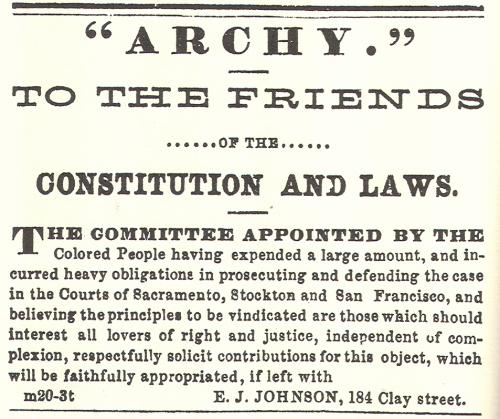 There is little known about Archy Lee’s childhood except that he was born in Mississippi in 1840, an illiterate slave owned by Charles Stovall.

In 1857, Charles Stovall moved to California from Missouri taking Lee with him.  While in California Stovall opened a school and hired out Lee for his wages.  In 1858 Stovall decided to move back to Mississippi with Lee. Sensing his return to a slave state, Lee escaped from Stovall and hid in a hotel run by a free African American.  He was later arrested and charged with violating the Fugitive Slave Law of 1850, which protected the owner of the slave from loosing his or her property in the event of the slave fleeing from his or her possession.

The case was first brought to the county court in San Francisco.  Lee’s attorney argued that since California was a free state, Stovall was not able to possess a slave in California unless he was in transit.  This kept slavery from being furtively introduced into the state.  Lee’s attorney indicated that Stovall was not in transit on account of his hiring Lee out for labor and his opening of a school.  Stovall’s attorney countered that Lee was his rightful slave because he had owned him in Mississippi and should be returned back to him.  After a delay of over two weeks the judge presiding over this case ruled in favor of Archy Lee and granted him his freedom.  During this delay Stovall arranged for the Supreme Court of California to hear the case.  As soon as Lee was free he was rearrested.

The Archy Lee Case was moved to the highest court in California.  Presiding over this court were three judges, two of whom were pro-slavery.  The Supreme Court simply said Lee should be returned back into Stovall’s custody and into slavery.  This enraged anti-slavery white activists as well as the Black community.  Stovall was forced to sneak Lee aboard a vessel and attempt to smuggle him out of the harbor and sail to Mississippi.

However, a strong network of San Francisco free blacks and white abolitionists located Lee.  They had police officers arrest Stovall for kidnapping Lee.  Stovall’s pro-slavery supporters argued that the arrest was a ploy to separate Lee from Stovall.

After the kidnapping of Lee and the subsequent arrest of Stovall, the case was again brought before the California State Supreme Court.  The judges presiding this time ruled in Lee’s favor declaring that he was not a fugitive slave.  Archy Lee took advantage of his freedom and moved to Canada during the Frazier River Gold Rush in 1858.  He is believed to have died of illness in British Columbia, Canada in 1873.