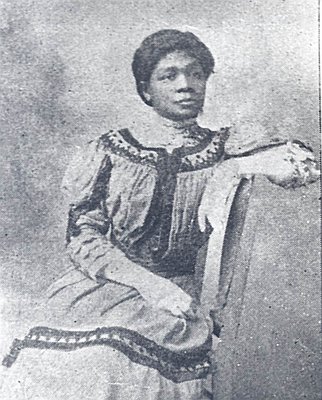 Harriet “Hattie” Redmond, a prominent black suffragist in Portland, Oregon, was born around 1862 in St. Louis, Missouri, to emancipated slaves Reuben and LaVinia (Vina) Crawford. She and her two brothers, along with her parents, had moved to Marysville, California by 1871. After a short time in Hood River, Oregon, the growing family moved west to Portland by 1880. As the older sister of seven siblings, Harriett aided her mother in caring for her younger brothers and sisters.

The Crawford family became integral in the Portland African American community. They attended Mt. Olivet Baptist Church, the first black Baptist church in Oregon. Influenced by her parents, Redmond worked for civil rights for blacks and women. Reuben Crawford had been emancipated in November 1862 but had been essentially on his own from the age of thirteen. He worked as a rope maker and a ship caulker. Vina Crawford was a domestic worker. Redmond emulated their strong work ethic.

Because of her race, Harriet Crawford was limited in job opportunities. She held several jobs including a hairdresser, a duster for a department store, and a janitor for the U.S. District Court of Oregon. She worked in that role for 29 years, and when she retired in 1929, she was granted a pension.

Harriet Crawford and Emerson Redmond, a waiter at several Portland hotels, married on November 27, 1893. However, it was allegedly not a pleasant marriage and on March 26, 1907, he died at the Multnomah County Poor Farm. They did not have children.

By the time the women’s suffrage campaign emerged in Oregon in 1912, Redmond was a noted leader. In fact, she was among only a handful of prominent African Americans in the entire country who supported votes for women. Almost all of the other prominent black suffragists were in New England, New York, and Illinois.

Redmond was the first secretary of the Colored Women’s Equal Suffrage League in Portland, a group that formed in 1912 out of the Colored Women’s Council of Portland, an organization that reached out to women in unfortunate situations. She became the president of the League. In mid-September 1912, she estimated there were 2,500 black women old enough to vote in Portland, but only 14 had joined the League. She blamed the lack of women’s understanding of privileges associated with voting, as well as the attitudes of their husbands.

The Colored Women’s Equal Suffrage League connected with churches in the community in the fight for equal voting rights. They worked in particular with black men who were often reluctant to support granting their wives and daughters and all black women the right to vote.  Finally, the Oregon legislature moved on this issue. Women were given the right to vote in 1912 in the state of Oregon. Redmond registered to vote in April 1913.

Harriet Crawford Redmond died in Portland at the age of ninety on June 27, 1952 of bronchial pneumonia. The Century of Action committee, a group conceived to celebrate a century of women’s voting rights in Oregon, revived her legacy in 2012. She was buried at Lone Fir Pioneer Cemetery, where the Friends of the cemetery honored her memory with a new tombstone engraved with “Black American Suffragist.” A ceremony was held at the cemetery to commemorate her on July 21, 2012.