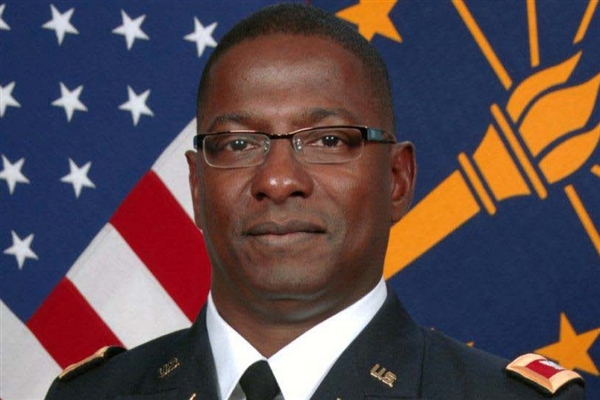 Black is the first African American General appointed by the Indiana National Guard. His military career spans over 30 years, and he has received the Bronze Star Medal, Meritorious Service Medal, Army Commendation Medal, Army Achievement Medal, National Defense Service Medal, and Global War on Terrorism Service Medal among others. Black received a B.S. in Business from the Citadel in South Carolina, and Master’s degrees from Indiana Wesleyan University and the United States Army War College.

Wayne Black began his military career in 1984 after receiving a commission through Reserve Officers’ Training Corps (ROTC) from the Citadel.  His first assignment was as part of the United States Army Reserve Control Group in Saint Louis, Missouri but after one month, Black transferred to Fort Sill, Oklahoma to take the Field Artillery Officer Basic Course and the Multiple Launch Rocket System Course. After completing the course in February 1985, Black was stationed at Camp Essayons, South Korea, serving as the Ammo Platoon Leader and later the Fire Platoon Leader of the 6th Battalion, 37th Field Artillery.

Later in 1985, Black enrolled in the United States Army Ranger School at Fort Benning, Georgia. Between 1986 and 1988, he served as the Commo Platoon Leader, Battery Executive Officer and finally Battalion Fire Support Officer of the 1st Battalion, 84th Field Artillery at Fort Lewis, Washington. From 1989 to 1993, Black served in a variety of leadership positions with the 2nd Battalion, 3rd Field Artillery in Kirchgoens, Germany.

In 2008, Black was deployed to Mazar-e-Sharif, Afghanistan as the Commander of the Regional Police Advisory Command-North. Between 2009 and 2012, Black acted as the G1 of Indiana Joint Forces Headquarters in Indianapolis, Indiana. From 2012 to 2013, Black served as the Chief, Facilities Management Officer of the Joint Forces Headquarters in Indianapolis. In 2013, coinciding with his promotion to Brigadier General, Black became the Assistant Adjutant General of the Indiana National Guard, where he currently serves.