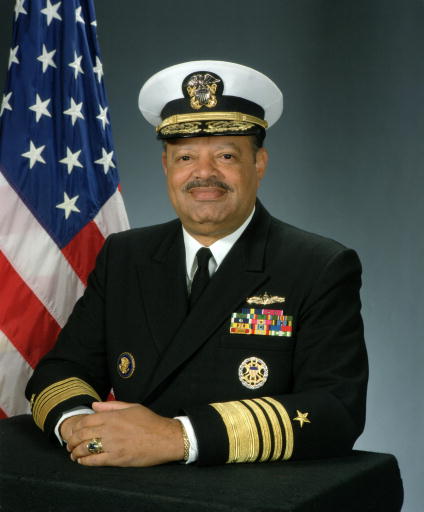 Joseph Paul Reason was the first African American to attain the rank of four-star admiral in the United States Navy.  Reason was born March 22, 1941, in Washington, D.C., the son of Howard University librarian and French language professor Joseph Henry Reason, and schoolteacher Bernice Reason (née Chism). As a teenager at McKinley Technology High School, he showed interest in the military but his application to enroll in the school’s Naval Reserve Officer Training Corps (NROTC) was rejected. A year at Swarthmore College and a year at Lincoln University preceded Reason’s attendance at Howard University where, during his junior year he was contacted by Congressman Charles Diggs Jr. and persuaded to apply to the U.S. Naval Academy. Joseph Reason graduated from the U.S. Naval Academy with a degree in naval science and was commissioned a Navy Ensign in 1965.

Reason’s first assignment was as operations officer on the destroyer escort USS J. Douglas Blackwood. After completing study in nuclear power at naval training facilities in New York and Maryland he served on the USS Truxtun which was deployed for duty in Southeast Asia in 1968. Additional training at the Naval Postgraduate School earned him a degree in computer systems management. He returned to sea duty aboard the nuclear-powered USS Enterprise from 1970 to 1973, operating in waters in Southeast Asia and the Indian Ocean. Promoted to Captain, Reason took courses at the Naval Destroyer School in Rhode Island and the Combat System Technical Schools Command in California. He returned to sea in 1976 on the USS Truxtun as Combat Systems Officer.

The American public got accustomed to seeing the 6’5” tall Reason in his next assignment serving as President Jimmy Carter’s Naval Aide who frequently trailed behind the president carrying a black case containing top-secret military codes, a role he filled in the White House from late 1976 to 1979.

Reason returned to the sea again as executive officer on the nuclear-powered guided missile cruiser USS Mississippi and commanding officer of the guided missile destroyers USS Coontz and USS Bainbridge. Following more training at Naval Reactors, a program jointly administered by the Navy and the U.S. Department of Energy, and at the time headed by Admiral Hyman Rickover, Reason was promoted to Rear Admiral in 1986 and sent to command Naval Base Seattle, managing naval activities for the states of Oregon, Washington, and Alaska. From 1988 to 1991, he commanded Cruiser-Destroyer Group One and Battle Group Romeo both of which patrolling eastern theaters. In 1990 Reason was promoted to Vice Admiral and given command of Naval Surface Forces in the Atlantic Fleet. When Reason was elevated to four-star Admiral in 1996, he was made Commander in Chief of the U.S. Atlantic Fleet composed of more than 190 ships, 1,300 aircraft, and 120,000 personnel at 17 naval bases, a post he held until he retired from the service in 1999.

Among Reason’s decorations were the Distinguished Service Medal, Legion of Merit, Republic of Vietnam Honor Medal, Armed Forces Expeditionary Medal, and the National Defense Service Medal. In retirement, he was Vice President for Ship Systems at SYNTEK Technologies Inc. in Virginia. Reason also headed the ship repair firm of Metro Marine Corporation in Norfolk, Virginia, and served on the board of several businesses and an advisor to two national defense groups. Reason is a member of Sigma Pi Phi fraternity.

Married to elementary schoolteacher Dianne Lillian Reason (née Fowler) since 1965, his daughter, Rebecca, was an accountant, and his son, Joseph Paul Jr., was a 1990 graduate of the U.S. Naval Academy at Annapolis, Maryland, making him and Joseph Paul Sr. the first African American father and son to complete their undergraduate study there.