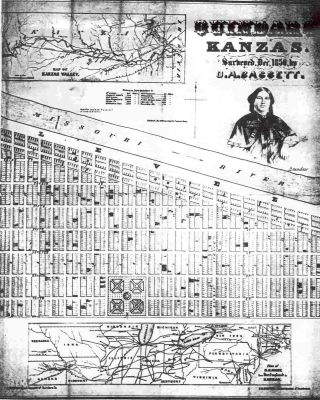 Quindaro was an abolitionist town on the border between the slave state of Missouri and free state settlers in Territorial Kansas.  By its existence, Quindaro undermined the attempted blockade of the Missouri River by proslavery advocates against additional free state supporters flowing into Kansas.   Quindaro was located on the lands of the Wyandot Tribe which was forced to move to Kansas Territory in 1844 on the heel of the Trail of Tears.  The Wyandot had been sympathetic to abolitionism and active in the underground railroad in their native Ohio.  When they arrived in Kansas Territory their tribal council immediately instituted anti-slavery laws, the first such laws in Kansas Territory.

Ten years after the Wyandot’s arrival in the territory, the 1854 Kansas-Nebraska Act authorized popular elections for citizens of the territory to determine whether it would enter the union as a free or slave state.  Missouri forces and their southern sympathizers began a series of intimidations of free-state supporters in the territory and in 1856 created a blockade of anti-slavery settlers both on the Missouri River and on overland routes into the territory.  It became clear to free state leaders such as Charles Robinson, the future first Governor of Kansas, that something must be done to ensure that other free state settlers could arrive in the territory.  Robinson collaborated with Wyandot Indian Agent Abelard Guthrie to get a 406 acre town site on Wyandot Land near the Missouri River.

Guthrie’s  Wyandot Native wife, Quindaro Nancy Brown, was instrumental in convincing her tribe to sell land for the town site and in appreciation town leaders named their community “Quindaro” when it was founded in 1857.  Quindaro prospered mainly because it became the single well-known destination for free state settlers bound for Kansas Territory.  As Robinson put it “the whole free-state world seemed bound for Quindaro” which provided food, shelter, and supplies for settlers from Northern states.

The town’s newspaper, the Quindaro Chindowan, became one of the territory’s most prominent free labor/free state proponents.  A town minister, Rev. Eben Blatchly, campaigned for black education at Quindaro, while Clarina Nichols, a prominent town resident and abolitionist, led the successful campaign to allow women to vote in school board elections in Kansas in 1861 even as she allowed her home to be one of several stations on the Quindaro underground railroad.

In 1858 Quindaro’s population peaked at 1,200 residents but by 1860 had plummeted to 629.  The decline in population was due to men enlisting in the Union army and the fact that Quindaro was no longer the only free state port, as other Missouri River towns opened to free state sympathizers.  Finally in 1862, having alienated most potential trading partners in Missouri, being situated on less than desirable bluff slopes, the town lost its charter and bid for the county seat.  After the Civil War, Quindaro evolved into a neighborhood which became a thriving community within Kansas City, Kansas fostering educational and medical institutions such as Western University and Douglas Hospital, dedicated to the development of the black American.

Diane Eichoff, “Quindaro,” a chapter within Revolutionary Heart: The
Life of Clarina Nichols and the Pioneering Crusade for Women’s Rights