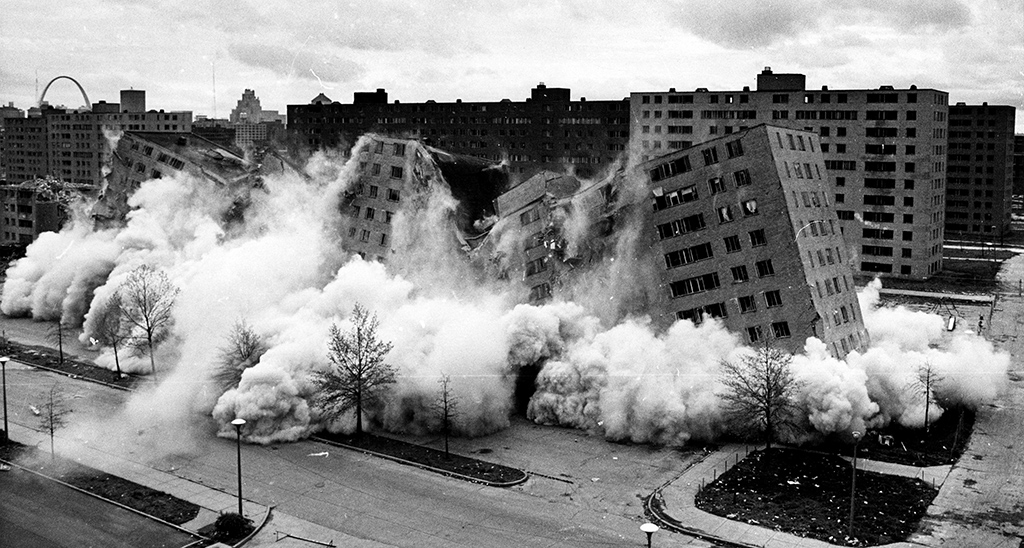 By 1956, the project totaled 33 high-rise buildings that consisted of the Wendell Oliver Pruitt Homes (1,736 units) and the William L. Igoe Apartments (1,134 units).  As with many other massive public housing projects built in urban cities across the United States after World War II, Pruit-Igoe was part of a redevelopment plan, pioneered by St. Louis Mayor Joseph M. Darst, to clear urban slum neighborhoods and attract more middle-class residents to a city that had experienced a decline in population by 6,000 people between 1930 and 1940.  Although some residents initially liked the housing units, soon after its completion, Pruitt-Igoe became associated with crime, poverty, and segregation.

By the end of World War II, the Desoto-Carr and Mill Creek Valley neighborhoods were targeted by city officials as sites for urban renewal.  With passage of the National Housing Acts of 1937 and 1949 and the creation of the Missouri Urban Redevelopment Corporation in 1943, federal and state dollars were made available for low-income housing in St. Louis.  In 1950 the St. Louis Housing Authority proposed locating Pruitt-Igoe in the Desoto-Carr neighborhood. Although Pruitt-Igoe was originally designed to be two-thirds private middle-income units and one-third public low-income units and to be racially segregated, the U.S. Supreme Court’s banning of formal segregation in Federal housing projects in 1955 opened all of Pruitt-Igoe to black tenants.  With continued white flight to surrounding suburbs and many working class African Americans choosing to live in housing made available by these fleeing families, Pruitt-Igoe by 1960 had become an overwhelmingly black project occupied by many of the city’s poorest families. By 1965, 9,962 tenants lived in Pruitt-Igoe.  Seven years later (1972) the vacancy was 27 percent, the highest of any public housing project in the nation.

The concentration of poverty combined with the high vacancy rate generated conditions that exacerbated crime and violence in the project.  By the early 1970s, Pruitt-Igoe had come to symbolize municipal indifference to African American poverty, budget constraints for affordable housing, and cutbacks in social programs and education that service African American communities.

Some tenants and civil rights groups attempted to address these issues. In 1968 a coalition of organizations—CORE, ACTION, the Mid-City Community Congress, the Jeff-Vander-Lou Community Action Group, the Christian Methodist Episcopal Ministerial Alliance, and New Voice—tried to organize the tenants for collective action.  In 1969, for example, Pruitt-Igoe tenants joined residents from other St. Louis housing projects in a nine-month rent strike led by Bertha Gilkey, a Pruitt-Igoe resident, to protest intolerable living conditions and the mismanagement of funds.

In 1972, the federal government gave the St. Louis Housing Authority permission to begin bulldozing and dynamiting the project, making it the first public housing facility in the nation to be demolished.  By 1976, all of the buildings were gone.  Currently, the former site of Pruitt-Igoe remains vacant and appears as an urban forest.