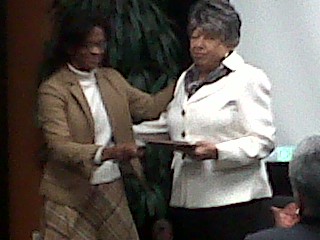 Georgia Montgomery Davis Powers was an American politician and activist, and in 1967 she became the first black to be elected to the senate of the state of Kentucky. Powers, a close friend of Dr. Martin Luther King Jr., also worked with Rev. Jesse Jackson and baseball great Jackie Robinson in the fight against racial discrimination and injustice in the United States.

Georgia Montgomery was born on October 19, 1923, in Springfield, Kentucky. The only daughter of Ben Montgomery, an enameller for the American Radiator & Standard Sanitary Company, and Francis Walker’s nine children, Powers lived in a self-described “two-room shack in Jim Crow Town” in Springfield before the family moved to Louisville when she was a small child.

As a child, Powers realized that she, as an African American, was a second-class citizen when her white playmate was sent to a different school from herself. Later, as a teenager, Powers would quit her job at a five-and-dime store rather than tell her black customers that they weren’t allowed to eat at its food counter. After graduating from Central High School in 1940, Powers attended Louisville Municipal College for two years.

After leaving college in Louisville, Powers moved around the United States, living in California and New York, and held numerous jobs, including building cargo planes during the Second World War. She married three times during her life, adopting one child, her son William, with her first husband Norman Davis in Louisville. There, she became involved with the New Covenant Presbyterian Church, and it was through the church she first worked the Kentucky Democratic Party.

Powers’s first foray into politics came when she joined the 1962 senatorial campaign staff of Louisville Mayor Wilson Wyatt. A year later, Powers would support another campaign, the successful bid by Edward T. Breathitt to become governor of Kentucky. Dissatisfied by the lack of progress she as a black woman was making in the political world, Powers left campaign organization to join the Civil Rights Movement, and became one of the lead coordinators for Kentucky’s March on Frankfort. The march, which brought ten thousand protesters to the state capital on March 5, 1964, demanding an end to discrimination against African Americans in public spaces, was the first of Powers’s major political accomplishments.

In 1967 Georgia Davis Powers became the first African American elected to the Kentucky Senate. She took office the following year and spent the next twenty-one years in the senate, fighting for the rights of African Americans, women, the poor, the disabled, and the disenfranchised. Among Powers’s work toward racial equality was her introduction of a bill to remove race from driver’s licenses, and her support of legislature for open housing. After her retirement in 1988, Powers continued to work toward human dignity and equal rights in the United States. She founded the Friends of Nursing Home Residents, FONHRI, which seeks to organize volunteers in the Louisville area to visit local nursing homes, and the organization, QUEST, Quality Education for All Students, to monitor efforts to prevent the re-segregation of local schools.